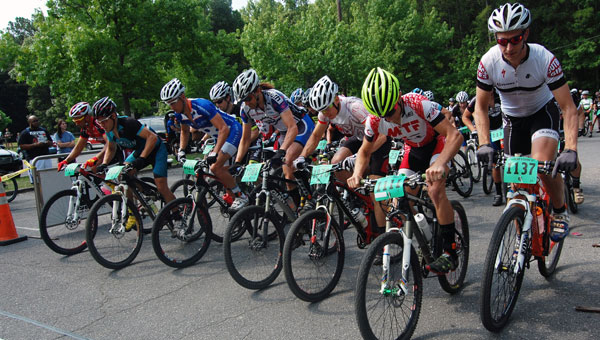 PELHAM – Oak Mountain State Park played host to one of the most premier off-road bike races in the Southeast on Sunday afternoon.

The 18th annual “Bump N Grind” mountain bike competition brought out bikers from across the region and country. The event was sponsored by the Birmingham Urban Mountain Pedalers (BUMP) and featured amateur and professional mountain bikers.

Men’s pro cross country winner and Florida native Ryan Woodall said that he enjoyed the course and that the trails were in great shape.

“They were very interesting,” he said. “We’re used to doing a couple of smaller laps but on this course it was like one big lap. But the new trails were great and it was a lot of fun on this fast single track.”

Woodall was no stranger to the OMSP course. This was his eighth year competing in the BUMP event and he said that he was aware of what trails he was on while biking. However, the new courses posed new challenges he said.

“Jekyll & Hyde sure do live up to their name,” he said. “It’s a little easy at first and gets harder as you get to the top. But it was interesting going up and down and seeing the difference between the two.”

Kimberly Flynn, winner of the women’s cross country race, was also impressed by the new additions to the course.  Flynn, a Chattanooga native, said that although she had raced the course for 12 years, she still had to make adjustments.

“I loved the course,” she said. “I love racing here and it’s one of my favorite races. The new trails made it a real long day but it’s a good challenging course.”

Flynn’s teammate Paula Vurks from US Stove-Trek finished in second place. Vurks said that although the heat was the biggest inconvenience, she enjoyed the course’s challenges.

“It’s one of the better cross country races in the nation,” she said. “I definitely plan on racing this event again.”

Noah Gasner, the catcher on the Calera 6-and-under all-star team, attempts to make a play at the plate in his... read more