Rick and Bubba Slam ends with a bang 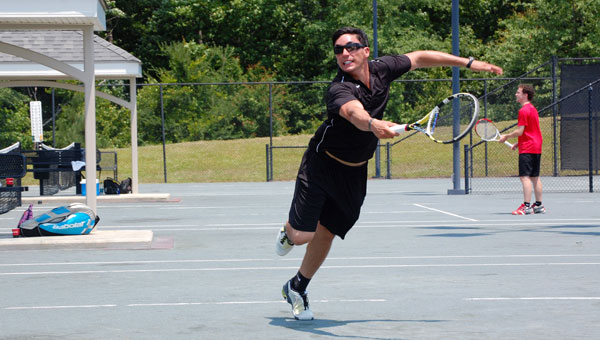 Jason Caudill competes in a in mixed doubles match during the Rick and Bubba Super Summer Slam at the Pelham Racquet Club. (Reporter Photo/Jessica Crihfield)

PELHAM – The fifth annual Rick and Bubba Super Summer Slam tennis tournament brought out players from around the region to the Pelham Racquet Club on Sunday.

The tournament was sponsored by local radio personalities Rick Burgess and Bill “Bubba” Busey of the “Rick and Bubba” morning show. Busey is a member of the Pelham Raquet Club and began sponsoring the event back in 2007.

The tournament featured a variety of tennis matches such as doubles, singles, and mixed doubles for all ages and genders. All of courts featured a clay surface and the tournament was officially sanctioned by the United States Tennis Association.

Men’s Open participant Austin Powell said that the facilities at the Pelham Racquet Club were fantastic.

“The court was great and the facility is unreal,” Powell said. “I’ve been to the Pelham Racquet Club a few times for junior competition and I always love coming back. They keep the courts in great condition.

The highlight of the tournament was the men’s open singles finale that pitted the four-seed Powell against top seeded Kristijan Mitrovski. The winner of that match received a $1,000 purse.

“The competition was fantastic,” Powell said. “Kristijan was definitely a good player and I knew I had to be prepared going into the match.”

Powell, a Muscle Shoals native, plays collegiately for North Carolina State University in Raleigh and would end up defeating Mitrovski 6-3, 6-1 in a heated competition.

As for the winnings, Powell said that he doesn’t intend to splurge on anything just yet.

“Well I’m a college player so I’m really limited as to what I can do with it,” he said. “So it’s something I can’t enjoy too much.”

Complete results can be found online at Tennislink.usta.com/TOURNAMENTS/TournamentHome_New/Tournament.aspx?T=117914.

One of the first groups takes the course at the Bump 'n Grind mountain bike race June 3 at Oak... read more