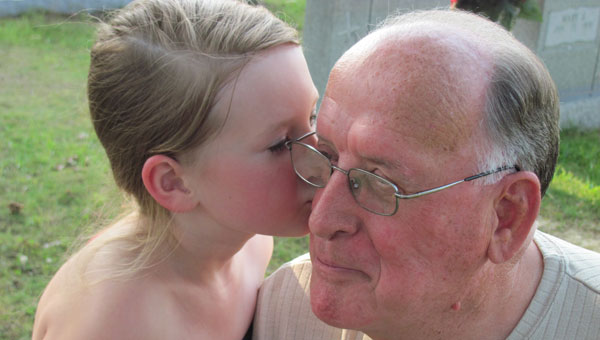 Ricky Smith receives a kiss from his granddaughter, Abby.

Somewhere around 1982 or 1983, Ricky Smith was well-known to a group of boys who played on Wayne Bunn’s winning Little League baseball team as “the bubble gum man.”

Smith told them after their first ballgame that he would be at every game from then on, supportive and armed with a huge sack of bubble gum for the team.

One night, Smith was running a bit late, infield was over and some of the boys were getting antsy. “Where’s the bubble gum man?” asked several of them.

“He will be here” the coach replied, “and besides, it’s y’all, not the bubble gum that wins games.”

Those boys had a good luck charm and they believed in it. Soon, here came Smith hurrying to the field with a big grin and a sack full of individual Big League Chews. Wow! Must have been a really big game.

Born and raised in the mill town of Siluria, he was a mix of country boy and bad boy.

Baby daughter Denise was born in 1966, graduated from Thompson High School and was tragically killed in 1986 in an automobile accident.

Smith and his wife had also lost a baby boy when Denise was just a toddler. Smith turned sharply from God and any sort of “mumbo-jumbo religion.”

Joyce continued on her faith journey without his support.

Son, Shane, was born in May 1971, and said his first memories were of church. Later that year, Smith started to attend church.

Brother Smith lost his beloved soul mate, Joyce, after a series of falls, fractures, pins, a leg amputation and finally residence in the nursing home. On Jan. 3, he visited her at 3:30 p.m., she took his hand and told him she was going to Heaven. Shane was called in and after three hours of visiting she told them to take care of each other and she was going to Heaven to see Neesie.

I asked Smith, “Where is God in all this sin, sickness, death and hard times?” He thought for a minute and said “Right by me in the middle of it all” and smiled.

Life is good for Lawley