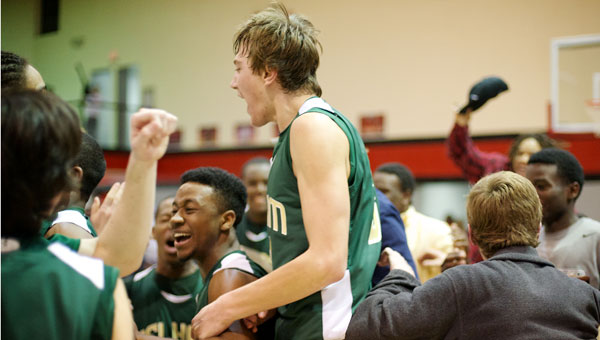 Former Pelham High School student-athlete Alec Rash, shown here celebrating the Panthers' Class 6A, Area 10 basketball tournament title, was selected by the Philadelphia Phillies in the second round of the 2012 MLB Draft on June 5. (File Photo)

Former Pelham High School pitcher Alec Rash was drafted in the second round of the 2012 MLB First-Year Player Draft on June 5 by the Philadelphia Phillies.

Rash, who moved back to Iowa for his senior season, was a standout at Adel Desoto Minburn High School in Adel, Iowa.

“It’s a dream come true,” Rash said. “I’m happy and it’s something you prepare yourself growing up.”

Rash, a 6-foot-6 right-hander, said that the preparation he received at Pelham played a key role in his successful senior year back in Iowa.

“I had a great experience at Pelham with Coach (Jeff) Mauldin,” he said. “He showed me a bunch of ways about pitching.”

Rash also said that coming out of Iowa as of one of the best prospects in the state and coming to Alabama for a year was a challenge. However, he said that he remained grounded and humbled thanks to the coaching he received at Pelham.

“I think the coaches gave me a lot to think about,” he said. “They made me realize that I had to compete and work harder in order to live up to being the best.”

Rash was also a member of the Panthers’ boys’ basketball team, which captured the Alabama High School Athletic Association Class 6A, Area 10 tournament championship during his lone season in Pelham. In addition to being a powerful right-handed pitcher, Rash averaged double figures in points per game on the basketball court.

Rash has committed to play at the University of Missouri and said contract negotiations will begin following the completion of the entire draft.

FROM STAFF REPORTS Many current and former University of Montevallo men’s soccer players have starring this summer in their respective... read more