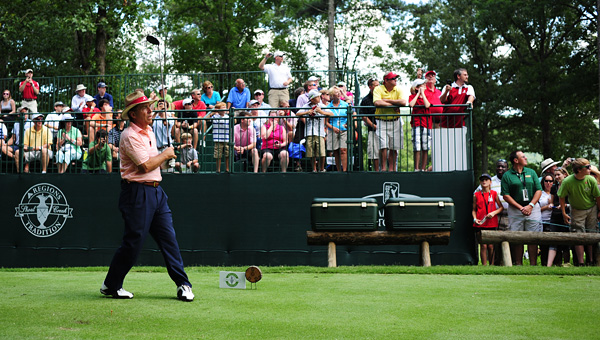 University of Alabama head football coach Nick Saban tees off at the start of his round during the Regions Tradition Pro-Am at Shoal Creek on June 6. (Reporter Photo/Jon Goering)

SHOAL CREEK — Several thousand spectators gathered around the lush fairways and smooth greens in the heavily wooded diamond known as Shoal Creek with footballs, golf balls and other memorabilia in hand looking for an autograph June 6 on the first day of golf at the Regions Tradition.

A common scene occurred in two separate locations during the informal opening day of the PGA Champions Tour event, which included the annual pro-am round and Alabama vs. Auburn putting challenge.

A few hundred fans made their way to the practice green during the morning to watch Auburn University football coach Gene Chizik compete on the Tigers’ team in the putting challenge.

A crowd of similar size waited at the tee box on the first hole in the afternoon to watch University of Alabama football coach Nick Saban tee off in his pro-am round.

The two drew the biggest crowd on a day filled with celebrity-viewing opportunities, including a chance to see the golf games of big names like former U.S. Secretary of State Condoleezza Rice and former American Idol winner Taylor Hicks, along with Alabama and Auburn greats like Al Del Greco, Jay Barker and Wimp Sanderson.

Chizik and Del Greco lifted Auburn to a second-consecutive victory in the putting challenge after finishing eight strokes ahead of the Alabama team of Barker and Sanderson.

The fun and games will quickly turn to heated competition on one of the top golf courses in the world in the first round of the major championship June 7.

Tom Lehman, the defending Regions Tradition champion, will tee off in a three-man grouping with Fred Couples and Jay Haas at 9:52 a.m in the opening round June 7.

Lehman, a Scottsdale, Ariz. native who edged Australian Peter Senior on the second hole in a two-hole playoff last year, said defending is his major tournament championship isn’t on his mind.

“I tend to not think too much about that,” said Lehman, who captured the Charles Schwab Cup in 2011. “Having had one year of experience here, which was a very good experience, there’s no guarantee of success again this year, but I tend to not get too concerned with being defending champion.”

Couples, who fought through injuries during last year’s tournament, said he believes he can be in the hunt for the Lyle Anderson trophy.

“I was pretty much miserable (last year),” said Couples, who played two rounds with Jack Nicklaus’ Memorial tournament winner Tiger Woods on the PGA Tour last weekend. “My back was pretty much shot. This year, I expect to be there on Sunday.”

Steve Lowery, a Greystone resident and the only local golfer in the 77-man field, will tee off in a three-man grouping of Steve Jones and Mike McCullough at 8:02 a.m. Lowery’s group will be the third group to tee off in the opening round.

Lowery finished in a six-way tie for 35th overall in the inaugural Regions Tradition after carding a 3-over par 291 in the tournament in 2011.

Bill Glasson and Fulton Allem, the only two-man grouping in the opening round, will get the tournament started with a 7:40 a.m. tee time.

Couples said he hasn’t seen Shoal Creek in better condition than it was during the pro-am round.