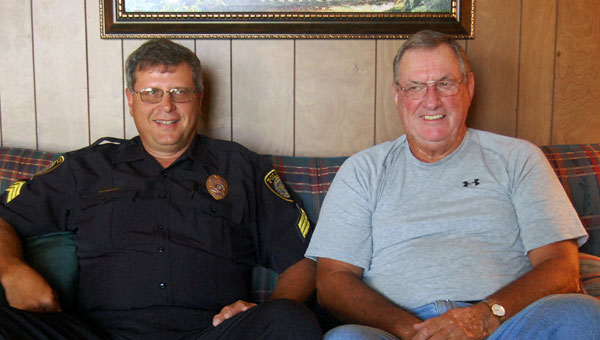 WILSONVILLE – Joining the Shelby County Sheriff’s Department was the last thing on Reed Smith’s mind as he was working in the construction business and raising his children with wife, Nancy.

Former Sheriff Charles “Red” Walker and two of his deputies had a different idea for Reed Smith, a Wilsonville resident. When construction work slowed down, Reed Smith let the deputies talk him into joining the force.

“Next thing I knew, I was on the way to Birmingham for a uniform,” he said, reminiscing with a laugh how he neglected to mention his career change to his wife.

“I did a lot of different things, but I never had any soul satisfaction until I got into law enforcement,” Reed Smith said. “It’d get discouraging at times. You get down and out, and then be able to solve a case or help someone and make it worthwhile.”

Jeff Smith, also a Wilsonville resident, worked in the construction business while serving on the sheriff’s reserve during weekends for eight years before joining the Pelham Police Department as a street officer in 1991.

“I was tired of traveling and living on the road. I was looking for consistency,” Jeff Smith said. “Once it’s in your blood, it’s hard to get out.”

“When I walk out the door every morning, you don’t know if you’re going to come home. We know it’s a risk putting the uniform on,” he said. “If we didn’t do it, who’s going to do it? You can’t think about the what-ifs.”

“It was one of those things he was just called to it,” Nancy Smith said of her husband. “It just fit him.”

Jeff Smith said he used to listen to the police scanner more often, but learned from his father to turn it off when he left work.

“I learned from him that you turn that switch off and have your family time,” he said. “You come home and enjoy life.”

Jeff Smith credits his father with his success in the law enforcement profession.

“I don’t believe I ever would have gained the knowledge of what law enforcement was without him,” Jeff Smith said. “I have no doubt that his involvement in it was what I saw, but I didn’t understand it then. You look to the older guys for guidance.”

Nancy Smith said she has watched her husband and son work in law enforcement for about 40 years.

“Going in, I had a really hard time,” she said. “I listened to the monitor constantly, but it got to the point where I couldn’t live like that.

“I saw how many people he could help,” she added about Reed Smith. “When Jeff chose to do it too, I was proud of him too.”

By NEAL WAGNER / City Editor A Pelham-based company has partnered with the city to offer its residents a way... read more