Family is first for Honeycutt 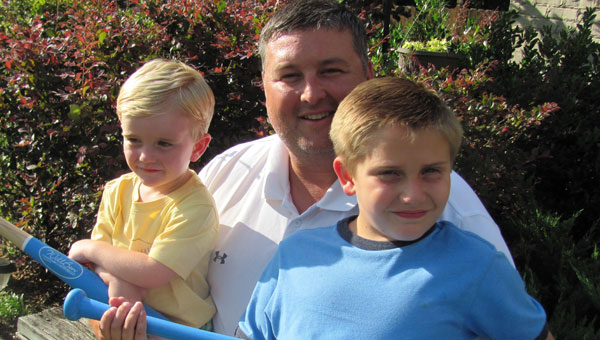 Will Honeycutt, center, with his sons, Will, left, and Ben, right. (contributed)

Chris Honeycutt was in the eighth grade when his family moved here from Louisiana. Honeycutt, being a gregarious, outgoing young man, quickly joined clubs, volunteered, played sports and made himself “just one of the boys.”

“I graduated in 1991 with Larry Simmons, former coach, educator and principal who was a good example for many of us wanna-be athletes,” he jokingly said. Simmons actually retired that year.

Honeycutt earned his bachelor’s degree from the University of Montevallo in August 1995. He married lifetime Alabaster resident Emily Lee in February of 1996 during the famous ice storm.

With various jobs in construction, industry, landscaping and athletics, Honeycutt continued his education and received his masters degree in May 2001. With the loss of his last coaching job due to educational cutbacks, he decided to start his own business. His business, WillBen Bats Inc. (named after his sons Will, 3, and Ben, 8 ) manufactures wooden bats.

These bats are custom-made on a computerized lathe, with paint, trim and logo. There are nine adult models, two youth models and of course T-Ball sizes. With his business just getting under way this past January, Honeycutt still has lots of unfilled dreams, including a permanent business location, more choices, faster turn-around times, a dream of having his own C & C computerized lathe and the ability to produce the small souvenir bats.

Great gifts for sons, grandsons and nephews for birthdays, Christmas or perhaps to commemorate a season, these bats can be ordered from Honeycutt. He hopes to have his website up soon.

“When I was single I enjoyed hunting, fishing, golfing, etc. But now I prefer family doings. There might be 12 to 15 of us at the ballpark to root for a nephew or cousin. Family is top dog to me,” he said.

Ricky Smith receives a kiss from his granddaughter, Abby. By SANDRA THAMES / Community Columnist Somewhere around 1982 or 1983,... read more