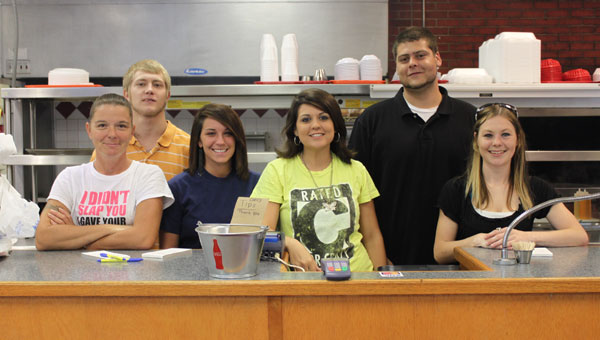 Kenneth Smith Jr. and his son, Kenneth Smith III, along with other family members, opened the barbecue restaurant about two months ago.

“We’ve had no complaints so far, and everyone has liked our barbecue,” said 22-year-old Kenneth Smith III.

The family lives in Cropwell, but intends to move to a farm in Harpersville in the next few weeks.

The father-son pair owned two restaurants prior to working in construction before the economy fell. Now, they’ve teamed up again to open the barbecue restaurant.

“The sauce is what sets us apart,” Smith said, noting a return customer said they should keep the sauce under “lock and key” to protect the recipe.

Smith said the family plans to make the restaurant a “steak and seafood” joint to have “everything anyone could want,” including steaks, tilapia and more. The Smiths are working on Richey’s beer license to offer beer to accompany their barbecue.

“Everything is handmade, all the way down to our hamburgers,” Smith said.

By JAN GRIFFEY/Editor COLUMBIANA — Within three weeks, Columbiana diners will have another choice when eating out here. Felix Rural... read more