Showdown at Shoal Creek in final round 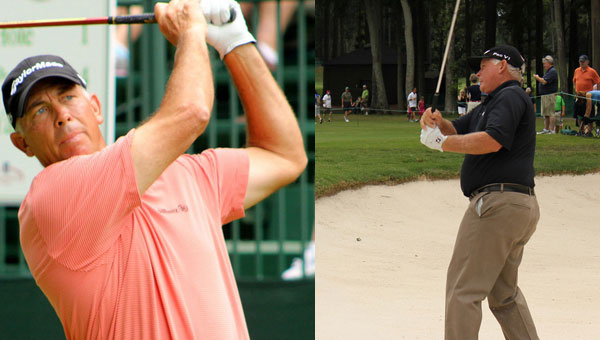 Tom Lehman, left, and Peter Senior, right, will tee off along with Jeff Sluman on June 10 at 9:30 a.m. in the final pairing of the PGA Champions Tour's 2012 Regions Tradition at Shoal Creek. (Reporter Photos/Kreable Young)

SHOAL CREEK — The top of the leaderboard heading into the final round of the PGA Champions Tour’s Regions Tradition on June 10 will look a lot like the final leaderboard a year ago.

Defending champion Tom Lehman, a Scottsdale, Ariz. native, and Australian Peter Senior are headed for another showdown at Shoal Creek, with Jeff Sluman looking to play a spoiler’s role in the hunt for the Lyle Anderson trophy, after the dust settled at the end of the third round June 9.

Lehman edged Senior in a two-hole playoff to capture the major championship last year. The duo, along with Sluman, will be paired together in the final round and will tee off on the first hole Sunday at 9:30 a.m. Players will tee off in three-man groups in hopes of concluding the tournament before inclement weather forecasted for Sunday arrives in the afternoon.

Lehman posted a 4-under par 68 after consecutive rounds of 3-under par 69 to stamp his name at the top of the leaderboard heading into the final round. Lehman, the defending Charles Schwab Cup champion, will enter Sunday with a tournament total 10-under par 206. Lehman’s round included an eagle on hole No. 3, a par 5, and a bunker shot for a birdie on hole No. 9, a par 4.

Lehman, who entered the final round trailing leader Mark Calcavecchia by two strokes a year ago, carries a two-stroke advantage into Sunday’s round this year.

“Two strokes is nice,” Lehman said, “but it’s not over by any means.”

Senior and Sluman enter the final round in a two-way tie for second with a tournament total 8-under par 208.

Senior didn’t make much noise in the first two rounds, but he quickly made his way up the leaderboard in the third round as he finished with a 6-under par 66.

“It was essential for me to shoot something decent today,” said Senior, the 2010 Australian PGA Championship winner who is looking for his first PGA Champions Tour victory.

Senior, who entered the weekend at 2-under par, finished with four birdies and an eagle as he posted a 30 on the front nine, which included an impressive birdie-eagle-birdie stretch on holes No. 6-8.

Senior weathered the back nine, including his only bogey in the third round at hole No. 12, a par 4, to play his way into the final pairing in the final round Sunday.

“My golf has been hot and cold,” Senior said. “I got it up and down a little bit to keep me in it.”

In addition to Lehman and Senior, Sluman, a Hinsdale, Ill. native, remains in the hunt for his first PGA Champions Tour victory since winning the Nature Valley First Tee Open last year at Pebble Beach after carding a 2-under par 70 in the third round.

Bill Glasson, a Stillwater, Okla. native who led after each of the first two rounds, posted a 2-over par 74 in the third round. Glasson is tied with Russ Cochran, Fred Funk and Brad Bryant for fourth in the standings with his 7-under par 209 heading into the final round.

Funk, Bryant and Glasson will tee off at 9:20 a.m. on the first hole in the final round.

Chien Soon Lu of Taiwan was in position to join the crowd at the top of the leaderboard, but a triple bogey on the final hole, a par 4, sent him into the clubhouse with a 3-under par 69, which puts him at 6-under par 210 for the tournament. Lu’s approach shot sailed over the green before a chip shot rolled off the front side of the 18th green.

Cochran and Lu, along with second day leader Dan Forsman, will tee off at 9:10 a.m. on the first hole in the final round.

Jerry Pate, a former University of Alabama golfer and a Shoal Creek member, dropped one stroke in the third round after posting a 2-over par 74. Pate enters the final round with a tournament total 4-over par 220 and currently sits in a tie for 38th in the standings.

Steve Lowery, a Greystone resident and the only local golfer in the field, enters the final round with a tournament total 6-over par 222, which places him a tie for 49th in the standings.

Lowery, a former University of Alabama golfer, carded an even par 72 in the third round. Lowery posted an eagle on hole No. 6, a par 5, but four bogeys in his final 12 holes kept him from moving up the leaderboard.

Lowery headed to the practice green to work on his putting immediately after his round. Lowery will tee off with Mark Wiebe and Denis Watson in the final round at 8:10 a.m. on hole No. 10.