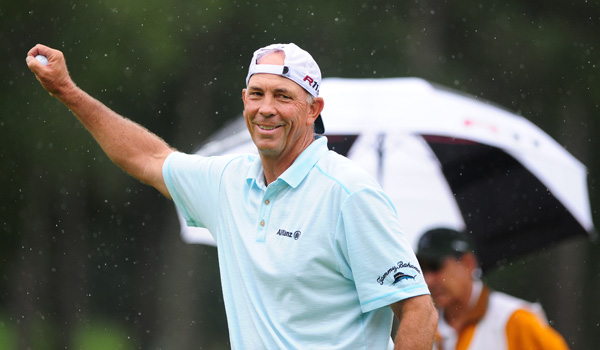 SHOAL CREEK — Tom Lehman had too many factors at play during the final round of the PGA Champions Tour’s 2012 Regions Tradition at Shoal Creek to worry about other golfers on the course.

“I didn’t really pay much attention to the scoreboard,” Lehman admitted while addressing undesirable weather conditions that interrupted play June 10.

Lehman didn’t have much reason to be concerned with the leaderboard after carding his fourth consecutive round in the 60s with a 4-under par 68 in the final round to seal a two-stroke victory in his successful defense of his Regions Tradition championship. Lehman, who finished the tournament at 14-under par 274, earned the $335,000 first-place prize money out of the $2.2 million purse for the tournament.

Lehman battled a heavy rain at times, occasionally wearing his hat backwards to avoid rain dropping from its lid, before embracing his daughters Rachael and Holly after capturing his third PGA Champions Tour major championship in front of a sizeable rain-soaked gallery on the 18th green at the Jack Nicklaus signature design.

“It was a good day,” said Lehman, a Scottsdale, Ariz. native. “It was a really good week. I really enjoyed the people and the city. Everything about playing golf here has been an A-plus.”

Lehman, who is the only golfer in history to have been awarded the Player of the Year honor on all three circuits of the PGA Tour, earned his first victory in 2012 and his sixth tournament championship on the PGA Champions Tour.

Lehman, who owns one major championship on the PGA Tour at the 1996 Open Championship, book-ended a pair of bogeys at holes No. 2 and No. 17 with six birdies in Sunday’s round, including a five-foot putt for birdie on hole No. 13, a par 3.

Lehman’s round also included a par save on hole No. 8, a par 3, in the midst of heavy rain after a missed putt for birdie from 60 feet out left him with a 12-foot putt for par.

“(The par putt) might have been the biggest putt of the day, quite frankly,” Lehman said.

Lehman, the PGA Champions Tour defending champion, moved up to second in the Charles Schwab Cup standings following his victory at the Regions Tradition.

German Bernhard Langer, who took over the top spot in the Charles Schwab Cup standings, and Chien Soon Lu of Taiwan each made a run at Lehman in the final round before finishing in a two-way tie for second in the standings.

Langer carded a 6-under par 66 in the final round, including a streak of three consecutive birdies on the back nine, to post a tournament total 12-under par 276. Langer’s final round included eight birdies, but also costly back-to-back bogeys on the front nine.

Lu also finished with a 6-under par 66, including an eagle on the front nine and three birdies on the back nine, to card a tournament total 10-under par 276.

Crowd favorite Fred Couples charged up the leaderboard in the final round and settled in at fourth in the standings with a tournament total 10-under par 278, including a tournament best 7-under par 65 on Sunday.

Couples, who drew the largest spectator following for the majority of the tournament, said his final round was the most enjoyable round he’s ever had at Shoal Creek.

“I like the course,” Couples said, “but I just don’t score very well on it. Today I did well.

Russ Cochran, a Paducah, Ky. native, and Bill Glasson, a Stillwater, Okla. native who led after each of the first two rounds, finished in a two-way tie for fifth with a tournament total 9-under par 279. Cochran and Glasson each shot a 2-under par 70 in the final round.

Australian Peter Senior and Jeff Sluman, a Hinsdale, Ill. native, who started the day tied for second, dropped down the leaderboard in the final round.

Jerry Pate, a former University of Alabama golfer and a Shoal Creek member, posted a 1-over par 73 in the final round. Pate, who finished with a tournament total 5-over par 293, finished in a tie for 45th in the standings.

Steve Lowery, a Greystone resident and the only local golfer in the field, carded an even par 72 in the final round. Lowery, a former University of Alabama golfer, carded a tournament total 6-over par 294 and finished in a tie for 47th in the standings.

Next year will mark the third year of a three-year commitment to host the Regions Tradition at Shoal Creek. Lehman said he’s in favor of the tournament staying put in Dunnavant Valley.

“I would be in favor of this becoming a permanent home and playing here for a long time,” Lehman said.

Showdown at Shoal Creek in final round