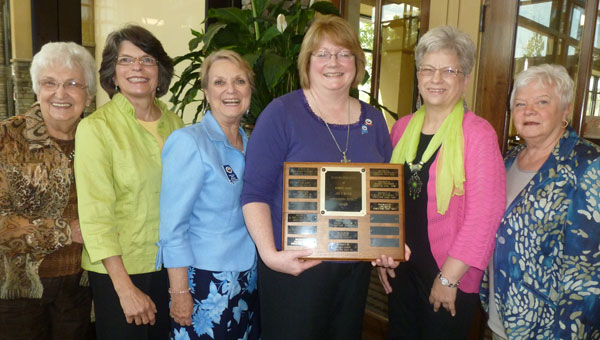 Jan Greer of Chelsea was awarded the Outstanding District Director award at the Alabama Federation of Women’s Clubs (AFWC) 117th Annual Convention. Greer was AFWC Third District director of clubs in Shelby and Jefferson Counties from 2010-2012.

Greer, the daughter of Henry and Jeanne Gibbs, graduated from Auburn University and is a computer business analyst at Sungard Data Systems. She has been very involved with AFWC, serving as president of Shades Mountain Women’s Club, member of Foster House (AFWC Headquarters), group leader of Alabama Youth Leadership Program and Third District director.

“I get a great deal of enjoyment helping others,” said Greer. “People have helped me, and I feel it is something I should do. I live by the motto, ‘service is the rent we pay for living.’ ”

AFWC is a member of the General Federation of Women’s Clubs (GFWC), an international organization more than 120 years old dedicated to community improvement by enhancing the lives of others through community service.

Keynote speaker at the convention was GFWC Second Vice-President Shelia E. Shea. Shea noted that federated women were instrumental in forming 75 percent of the United States libraries (including Shelby County’s).

GFWC has been active in supporting causes as the Pure Food and Drug Act, alcohol and drug abuse programs for women and children and “Youth Suicide Prevention” program.