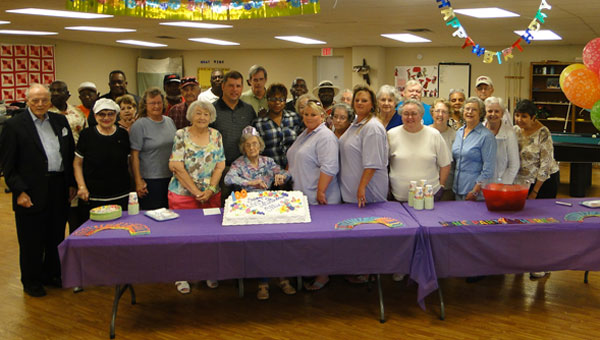 Ollie Lowery is surrounded by her family and friends to celebrate her 100th birthday May 29 at the Calera Senior Center. (contributed)

Ollie Lowery celebrated her 100th birthday surrounded by family and friends at the Calera Senior Center. Ollie, born to Clint and Lela Cost of Chilton County on May 29, 1912, moved to Calera when she was 4. She first attended Union Point School in Dry Valley, then graduated from Calera in ninth grade. She married Russell Lowery at the age of 18.

“We caught June bugs and tied a string to their tail to watch them fly. I had a silver bucket I carried my lunch in, and I didn’t let nobody mess with that little bucket,” she said.

Other memories are the horse-drawn, glass carriage funeral procession for the wife of Mr. Hardy who owned Hardy Lime Plant, circus parades and stories her Uncle Bailey Cost told of Wilson’s Raiders.

Ollie got tickled talking about trains that stopped in Calera.

“The Martin boys opened the box cars and let a bunch of goats get in to lick the salt, then they closed it back and the train took the goats on out. Mr. Jake Johnson said when he first come to Calera that everybody met the train, even the goats and the cows and the horses,” she said.

Ollie and Russell have two children, Donald and Nell (Lowery) Cadle, four grandchildren and two great-grandchildren. Cadle has heard many stories of her mother’s childhood escapades.

“Mother and her older brother got in lots of trouble. One time they set their sister on top of the pig pen. It fell in and she landed on the pigs.”

Ollie worked at a 5-and-10 cent store in Calera, the elastic plant in Columbiana and Buck Creek Cotton Mill in Siluria. Russell played first base for the cotton mill’s baseball team.

Tina Simmons, assistant manager at the center, was disappointed Vivian Turquitt missed the celebration. “Ms. Ollie and Ms. Vivian call themselves Lucy and Ethel because working together they’re like them in the chocolate factory. We made her a cake that says ‘I love Ollie.’”

Manager Bo Robertson said Ollie has volunteered about 25 years with the center.

“She’s prepared homebound meals and helped with many other things. She’s a wonderful lady!”