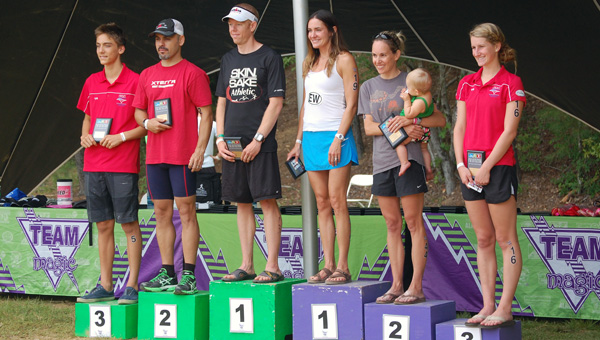 The top three men and women triathletes at the Buster Britton Memorial Triathlon line up on the winner's podium to receive their plaques after the race at Oak Mountain State Park on June 9. (Reporter Photo/Jessica Crihfield)

PELHAM – The 26th annual Buster Britton Memorial Triathlon took over half of Oak Mountain State Park on Saturday and brought out more than 500 participants.

Oak Mountain State Park once again served as a venue for a major triathlon. The park successfully played host last month to the ITC Cross Triathlon World Championship/XTERRA Southeast Championship. The annual triathlon is named after former Birmingham triathlete Buster Britton and is put on by Team Magic Inc.

Team Magic founder and event director Therese Bynum said that the park has always been a great venue for the triathlon and multi-sport events.

“Oak Mountain is just a great place for multi-sport,”   Bynum said. “Whether it is the lake or all the awesome trails that BUMP has built, it has everything.”

Bynum said that the turnout for this year’s triathlon was up from previous years.

“This was our largest race is several years,” she said. “We had over 500 people this year. Normally we sell out around 500 but the last couple of years the numbers have been down a little so it was a great turnout.”

This year’s event brought out beginners, veterans and weekend warriors to bike on some of BUMP’s newest courses, swim 400 yards across Double Oaks Lake and run across some of the rugged OMSP terrain.

The winner of the overall race was Aaron Ainsworth who finished just under one hour with a time of 58:08. Full race results can be found at http://www.team-magic.com/results.htm#2012.

FROM STAFF REPORTS In an effort to expand the opportunity for bowhunters to harvest more deer within Oak Mountain State... read more