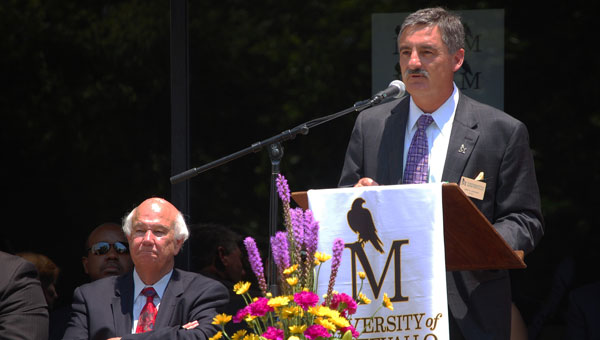 UM President Dr. John Stewart said the university will be a national model for partnerships, as UM has partnered with Shelby County and the City of Montevallo for revitalization projects. (Reporter photo/Jessica Crihfield)

County Manager Alex Dudchock said the county began its partnership with UM about four years ago, and the city joined the discussion in November.

“We saw that we had much more to do. We have significant work to do throughout our county,” Dudchock said. “We want to show what the University of Montevallo has been, should have already been recognized as and will be in the next five years.

“Our work is still to be done,” he added.

The work began when the university, the county and the Montevallo Development Cooperative District purchased the former Alabama Power building, which cost $850,000, according to City Clerk Herman Lehman. The county and university are joining to spend about $900,000 to renovate the facility, which is a “win-win,” according to Dudchock.

Dudchock said one goal is to grow the UM student body by 500 full-time students.

“We know what 500 more students here will do for the university, the community and the county,” he said. “We’re just glad we’re a part of it.”

“I never imagined how huge and substantial this partnership would become,” McCrory said.

The former Alabama Power building will hold four academic departments currently housed in UM’s Jeter Hall, including sociology, social work, political science and history. The facility will open in 2013, according to Dudchock.

According to Stewart, approximately 1,000 students will utilize the three-story facility located in downtown Montevallo for classes.

UM graduate Todd Strange, chairman of the UM Board of Trustees and mayor of Montgomery, said he has seen partnerships before, but has never seen one so “dramatic and dynamic” as the one among the city, county and university.

“It’s a great marriage, a wonderful relationship and just the beginning,” he said.