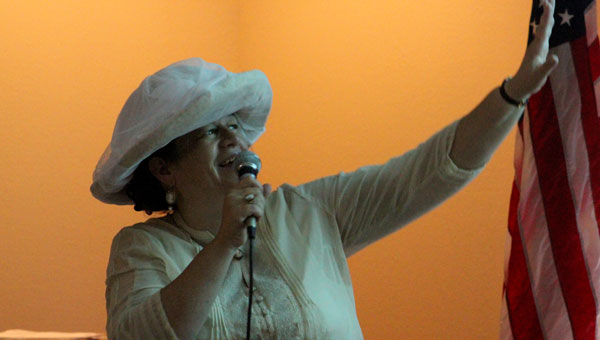 PELHAM – Dr. Julie Williams regaled Pelham seniors with the story of her great uncle’s survival of his Titanic voyage at the Pelham Senior Center June 14.

Williams, a professor at Samford University, said her great uncle, Albert F. Caldwell, his wife, Sylvia Harbaugh Caldwell, and their 10-month-old son, Alden, were one of the few families to survive the Titanic intact.

Williams documented the family’s journey in her new book, “A Rare Titanic Family: The Caldwells’ Story of Survival.”

The Caldwells were missionary schoolteachers in Siam, or today’s Thailand, and were traveling home to America aboard the Titanic.

According to Williams, as the family boarded the ship, Sylvia Caldwell asked a bag handler, “Is this ship really unsinkable?” To which the man responded, “Yes, lady, God himself could not sink this ship.”

During his time on the Titanic, Albert Caldwell talked his way into seeing the engine room, which he wanted to photograph. He met the stokers, men shoveling coal, and posed as one in a photo.

“Little did he know that shovel full of coal would save his life,” Williams said.

After the ship hit the iceberg, the couple left their belongings in a locked trunk, including $100 in U.S. gold coins, and discussed staying on the ship instead of getting on a lifeboat. At that point, the stoker Albert Caldwell met in the engine room recognized him.

“Mr. Caldwell, if you value your life, get off this ship,” said the stoker, according to Williams.

This caused the family to board a lifeboat as the Titanic was sinking.

“With a gentle swish, she was gone,” said Williams, recalling her great uncle’s words.

In the 19030s, Albert and Sylvia Caldwell divorced, and Albert Caldwell later married Williams’ great aunt, thus allowing Williams to hear her great uncle’s stories. Albert Caldwell passed away in March 1977 at the age of 91.

“When people hear it’s a personal story, they think it’ll be a memoir,” Williams said. “I wrote the first and last chapters in first person to satisfy my need to be attached to the story, but I wrote the middle chapters as if I were detached.”

ISS campus buildings to get update