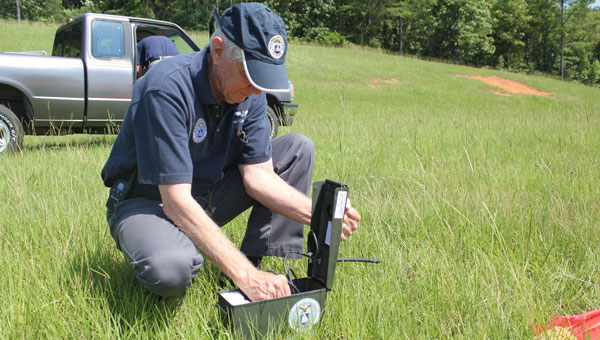 One of the scenarios for Mission “Operation Backwoods,” involved an airplane flying from Birmingham to Montgomery, but the plane didn’t make it to its destination.

“They’re never going to be anywhere easy,” Kilgore said of downed aircraft. “They normally go down in bad weather, and they normally crash in the middle of a forest.

“It’s never easy, but we have a joint effort across the state,” he added.

According to Public Information Officer Rhonda Pyatt, a Hoover resident, more than 80 volunteers from across the state participated in the exercise, which simulated mission base operating without commercial power after a disaster, such as a tornado. The exercises of “sorties” were conducted to locate missing planes, people and take aerial photographs of damage.

“As a part of the drill, the airplane will have to use visual signals to bring crews in,” said Lt. Col. Eldon Woodie.

When a plane or boat crashes, an Emergency Locator Transmitter sends a signal, which the CAP uses to locate the craft, according to Kilgore.

“The aircrew has to get the ground team physically there,” Kilgore said. “It calls off the hunt when someone turns the ELT off.”

Pyatt said three planes flew from Folsom Field in Cullman County during the exercise searching for the “downed plane,” or, in actual fact, a red X with an ELT near the Shelby County Airport.

“They flew at different times. We were able to fly a lot of training missions, or sorties,” Pyatt said. “The first plane went to look and find the crash site, then return to base. Another pilot, observer and scanner repeated the same thing in the next plane.”

A ground team drove from Cullman with the third plane.

“Everyone was able to find what they were looking for,” Pyatt said. “The exercise was to evaluate and enhance communication skills between the air and ground crews so they could guide them to the location.”

According to Woodie and Capt. Dawson Moore, CAP cadets man many of the ground crews. The cadet program offers aviation experience to ages 12-18.

“CAP is a good place for a young person to build responsibility and judgment,” Woodie said. “A lot of young people don’t realize the aviation opportunities in Alabama.”

For more information about the Civil Air Patrol, visit Alwg.cap.gov.

FROM STAFF REPORTS Shelby County’s unemployment rate rose slightly in May to 5.2 percent from the 4.6 percent mark in... read more