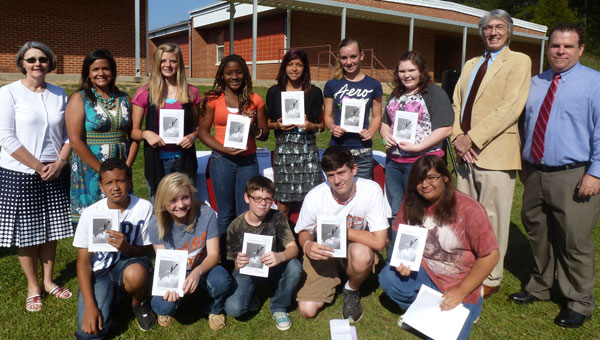 “Learning to Fly” is the second anthology of poems written by Columbiana Middle School students, edited by acclaimed poet Tony Crunk, from the award-winning Writing Our Stories project funded by the Shelby County Arts Council (SCAC) and the Alabama Writer’s Forum (AWF).

The program is in partnership with the Shelby County School system and the Alabama State Council of the Arts.

In front of students, faculty, parents and guests, 10 seventh graders read their poems on a grassy field at CMS, a representation of the body of work from the 59 students who participated in this project.

Writing Our Stories is the signature literary arts program of AWF and was a huge success last year at CMS with the publishing of the first anthology, “Dreams and Possibilites.”

The classes expanded this year to more students as Crunk led two seventh-grade classes in the craft of creative writing and to help the students find their voice. The students’ teachers are Maite Miller and Richard Scott.

“I learned that when you think a piece of writing is done, it’s not,” said student John-Thomas Owen. “I learned to be more creative, put more effort in, and make it mine, make it shine, let it stand out, and make it one of a kind.”

Crunk is an accomplished writer, the author of four collections of poetry, one a winner at Yale, four children’s books and a collection of short fiction.

He has taught at a number of universities and is a founding member of the Magic City Community Writers, a “co-operative of Birmingham-area writers offering creative writing programs to the public.” He has been on the staff of the CWF since 2008.

“Students who previously thought they couldn’t soon realized they could,” Scott said. “In the process, their teacher, Tony Crunk, helped them grow priceless wings that will allow them to fly to new heights.”

Congratulations to CMS and its students for their success with “Learning to Fly” and to Tony Crunk, mentor and teacher.