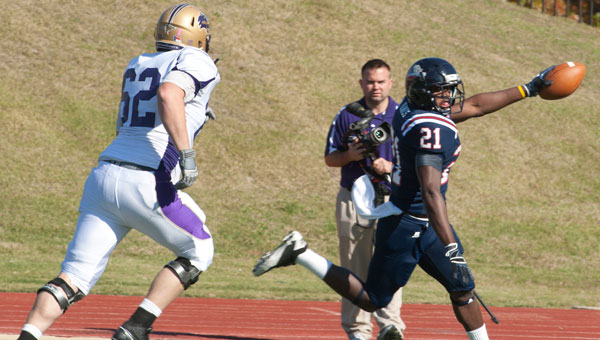 Hines, who is entering his senior season at Samford University, was named to the College Football Performance Awards (CFPA) watch list for defensive backs in early June.

Hines was one of only 38 defensive backs from across the country in all of Football Championship Subdivision football to make the preseason watch list.

In 2011, Hines led his team in tackles with 66 and in pass break-ups with nine. Hines was second on the Bulldogs’ defense in interceptions.

Upon learning he had been named to the CFPA watch list, Hines said it helped his confidence and, “really makes me want to work harder.”

Of the 38 defensive backs on the list, only four play for schools in Alabama, with Hines being the only one selected from Samford. Still, the Bulldogs have had three other players make the same CFPA watch list at other positions, which Hines credits to the team’s recruiting.

“It’s really the program, “ Hines said about recruiting, which he described as “phenomenal.” Hines said the coaches bring in “real quality guys.”

Hines knows all about the Bulldogs’ recruiting after choosing Samford over UAB and Western Kentucky following his senior season at Pelham. One reason was for the chance to stay close to home.

“I wanted to be able to play in front of my home crowd and have friends and family come see my games,” Hines said.

Hines, who has collected more than 100 tackles in his Samford career, including over 80 solo take downs, was quick to add that academics played a part in his choice as well.

“The university is great,” Hines said. “The education received here can’t compare with some of my other choices.”

Hines is looking forward to the upcoming season, with the Bulldogs fighting for a Southern Conference title. Hines said the team has a totally new mindset.

“A lot of guys who played last season are coming back and we really think we can do well,” Hines said.

Hines and the rest of his teammates, which include former Shelby County standouts Darion Sutton, Tae Lewis and Denzel Williams, open the 2012 season Sept. 1 at home against Southern Conference foe Furman.