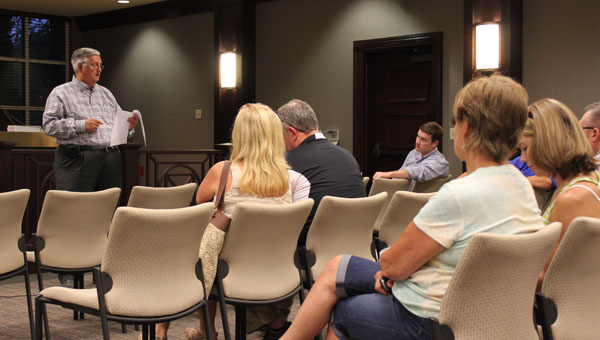 During the meeting, Niven said the City of Chelsea has donated more than $1.1 million to local schools for the past years and recently voted to spend $500,000 on a gym in the new elementary school.

Niven also mentioned the city’s youth sports facilities, including the baseball and softball complex, football practice areas and soccer fields. According to Niven, the city took over facility maintenance about four years ago, and the city pays for utilities and upkeep.

“We are a city, not a youth club, not a fire department and not a police department,” Niven said. “I think we’ve done a pretty good job in the city’s 16 years in existence.”

The majority of the session’s discussion revolved around the Chelsea Youth Club and the city’s athletic facilities.

“We’re a 6A program, and in order to compete and not be embarrassed, we need the facilities,” he said.

Danny Evans, field director for CYC baseball board, said the city has a “1970s facility,” and recent updates are “just a big Bandaid” for what the city needs to accommodate a growing population.

“We need better facilities,” he said, mentioning the city’s practice football field is “dangerous” to youth.

“We want our children to rank amongst those from Oak Mountain or Hoover,” she said to Niven. “Thank you for your attempts, but your attempts for the parents of Chelsea are not enough.”

City Councilman Robert Barnes said Chelsea faces different problems from other cities its size since it is a new city.

“We have a little different set of problems as a new city,” Barnes said. “Everything we do, we start from scratch. We have to buy the property.”

Johnny Howard, president of the CYC executive board, said the relationship between the executive board and the Chelsea City Council is “better than ever,” but every Chelsea youth sport needs help.

According to Howard, when the city took over facility maintenance, baseball league fees dropped from $155 per child to $110.

“The mayor knows and agrees we’re not where we need to be,” he said.

Howard said the CYC football program has 12 teams for kindergarten through sixth grade, and the city only has three “legitimate” places for teams to practice.

Marcum said the city is “busting at the seams,” and the residents need answers and help.

Niven said he and the council would review the suggestions made during the session, and would return within a month with a plan.

“We need a clear picture of what we’re talking about,” he said.

“Do we have everything? No. Are we trying to get it? Yes,” Niven said. “We’re 16 years old. We have growing pains, and we are trying to address those pains.”