Westover gets gear from Firehouse Subs 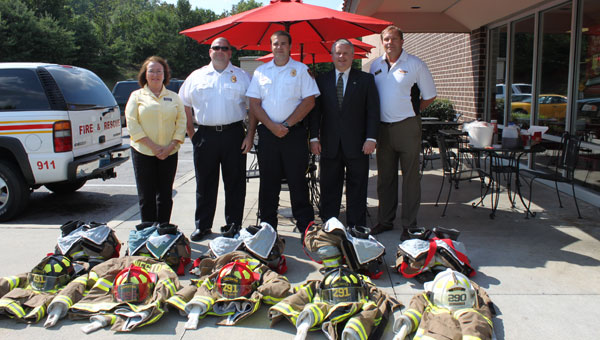 The foundation donated 10 full sets of turnout gear, which cost more than $1,900 apiece, according to Mayor Mark McLaughlin. The gear consists of coats, helmets, pants, boots and “everything a firefighter needs for protection,” McLaughlin said.

The presentation took place at the Brook Highland Firehouse Subs off U.S. 280 in North Shelby, a restaurant franchised by John and Claudia Porter.

McLaughlin said the Westover Fire Department, a career and volunteer department founded in 2007, has grown significantly.

“We had 10 sets of turnout gear 10 years ago, but we have a lot more firefighters now. We were having to piecemeal gear together,” he said. “This is a huge amount of help. Now we have 20 complete sets.”

McLaughlin called the donation a “major contribution” to the fire department.

“Now we can put our firefighters in first-class equipment,” he said.

“I’m very familiar with the sacrifice firefighters have to make,” Sorensen said.

According to Sorensen, the foundation has donated more than $4 million in 300 communities across the United States.

“The money stays in the community,” Sorensen said. “It’s about being more than just a sandwich shop.”