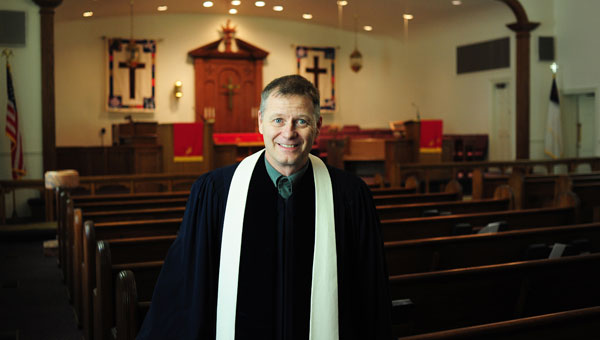 Lloyd Gibbs recently moved his family to Columbiana after serving as pastor of Lincoln United Methodist Church in Lincoln for four years.

Gibbs grew up in Wright and graduated from Waterloo High School. He then attended the University of North Alabama, where he met his wife, Anna. He finished his schooling at Memphis Theological Seminary in Memphis, Tenn. Gibbs was first appointed in the Methodist church in 1988.

The couple has one daughter, 16-year-old Elizabeth, who is a homeschooled senior at Pathway Academy.

Gibbs said he and his family visited downtown Columbiana one Friday night, ate at Bernie’s on Main, listened to music and met some of his new church’s members.

“I believe this is where God brought me to be,” he said of Columbiana. “Everyone’s been warm and kind and has made me and my family very welcome.”

Gibbs said the church has “good news” to share.

“It’s been the same mission for 2,000-plus years. It’s about making believers,” he said. “The church is not a civic organization. It’s God’s work on earth.

“Not that I have anything against civic organizations, but the church is more than that. We have a message from God and a mission from God.”

Gibbs said the next big event at Columbiana UMC is Vacation Bible School, which will run from July 22-26 for kids 4-years-old through fifth grade.

He also invited the community to join church services. Contemporary services begin at 9 a.m., followed by Sunday school at 10 a.m. and a traditional worship service at 11 a.m.

“It’s a great and rewarding life,” Gibbs said of the pastoral life. “It’s not too dissimilar for how we love our children. God loves us.”