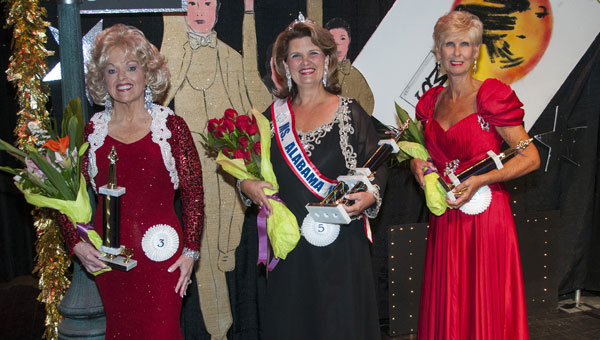 “This is the first time I’ve done a pageant since high school,” Dorough said. “I had a wonderful time. We have three sons, and five grandsons and two granddaughters. Most of my time is spent doing football and baseball, so it was fun to a thing that was a girl thing.”

To qualify for the Ms. Senior pageants, contestants must be at least 60 years old. Contestants are judged on their philosophy of life, interview questions, talent and poise.

“In an evening gown, it’s the way your walk out on stage,” Dorough said of the poise category.

Dorough, 61, won the state title at Wallace State Community College in Hanceville, and will compete for the national title in Atlantic City Oct. 7-12.

“The best part about it was I was able to meet so many new friends and other senior ladies that had an opportunity to do that pageant,” she said. “I think everyone in the pageant at the state level has emailed me or sent me a note. We’re going to stay in touch.”

For her talent, Dorough exhibits her musical abilities during the pageants.

For the Shelby County pageant, Dorough sang and played the keyboard for a patriotic medley. For the state competition, she followed a Broadway theme and, with the help of her director, Westover resident Edwina Chappell, chose to sing “Orange Colored Sky.”

Dorough will spend the next months preparing for her pageant and acting as honorary judge at events across the state.

“I was hoping I could help promote the pageant by getting the word out about the pageant because I didn’t really know much about it in the beginning,” she said.

Since Dorough won the state-level pageant, a student in Shelby County will receive scholarship money.

“Shelby County will have that money available so students can make application for that,” she said.

Dorough said she encourages other women to compete in the pageant.

“I encourage (women) to get out and try something new or something they’ve dreamed of,” she said. “It enables you to make an influence on a lot of people by being there. For the ladies, I think it’s important to feel good about themselves and take an opportunity to do this.”

Dorough, wife of Harry E. Dorough Jr., is the vice president and general manager of American Sure Step, Inc. in Pelham.