Eatin’ ribs for a good cause 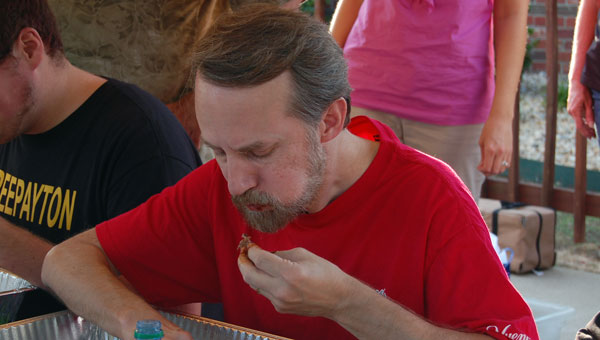 Proceeds from the rib-eating contest, held at Pelham’s Texas Roadhouse June 20, were donated to the North Shelby Library. Kristina Young, marketing manager with Texas Roadhouse, said the contest was part of the restaurant’ month-long Rib Fest, a promotion to “brag about how good our ribs are” and how the ribs are cooked for three days.

“Then it evolved into a partnership,” Young said. “This is another way for us to help them.”

“A lot of eating contests give cash prizes, but we partner with local businesses (for donated prizes) so we can give the money to the charity,” Young said.

“Texas Roadhouse is such a good sport and good for the community. They’re just good neighbors,” he said.

Contestants were given a full slab of ribs during the competition.

“I’d do it, but I’d get more on me than in me,” NSL board member Barbara Calhoun said, laughing.

Instead, Calhoun and NSL board treasurer Megan Lansden cheered on Tim Ryan, president of the library board, as he scarfed down ribs.

“With state funding down, businesses in the community have really stepped up to help us,” Ryan said.

Lansden said the library has a lot programming coming up with its summer reading program.

“We’ve been trying to come up with some creative ways to raise some money, and Texas Roadhouse has been great,” she said.

Library employee Eric Dennison ate his slab of ribs in the quickest time, followed by CBS 42 reporter Al Ratcliffe and Dale Boone, who drove from Atlanta to participate.

“I wasn’t expecting to win,” Dennison said, laughing. “Do I look like a contest eater?

“The ribs were great,” he added. “The meat falls of the bone and made them easier to eat.”