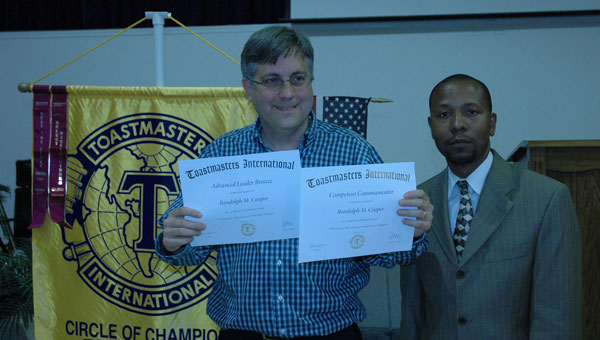 ALABASTER – When Wanda Spillers moved to Pelham in 2006, she looked to join a local Toastmasters Club. She didn’t find a meeting time that met her work schedule, so she founded a chapter in 2009 in Alabaster, the Circle of Champions Toastmasters Club.

“I went to Toastmasters group, and I’ve been hooked ever since,” she said. “Public speaking is a skill that transcends all jobs and many diverse things, so you can’t really get around it. In order to feel comfortable to do it, it’s one of those things you have to practice.”

“It is a self-paced program. You go at your own rate,” Cooper said. “The other part of the program is the impromptu speaking, which we call table topics. People ask questions and you have one or two minutes to respond to the questions.”

Cooper, a systems analyst, said the club, which has about 18 active members, is made of a variety of people, and all are invited.

“It’s to help people who generally need to improve their presentation skills,” he said. “If they want to be a speaker later in their life, it helps to develop those skills to do that.”

To join Toastmasters, the cost is $41 for six months and a one-time new members’ fee of $20, which covers materials.

“I’ve developed enough self-confidence that I don’t have to be right bout everything,” he added. “I used to be a very argumentative person before I joined. Now I’m fairly comfortable with who I am. I’ve found a style of leadership that’s right for me.”

The Circle of Champions Toastmasters Club meets on the first and third Monday of the month at 6:30 p.m. at Abundant Life Church, which is located at 1625 Kent Dairy Road in Alabaster. For more information, visit Circlechampions.toastmastersclubs.org.