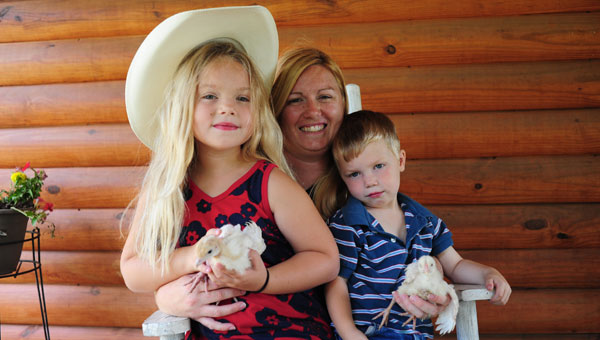 MONTEVALLO – Farming for the Ryan and Jennifer Winslett is truly a family business.

The couple began Winslett Farms off Shelby County 10 near Pea Ridge with their two children, Emma Grace, 6, and Blake, 3.

“It’s just the four of us,” Jennifer Winslett said. “It’s a business, but it’s our hobby.”

Jennifer Winslett, an assistant principal at Shelby Elementary, grew up in a farming family in Louisiana, while her husband is an Alabaster native.

As the family began raising grass-fed cows and poultry, they realized there was a market for the healthy products.

“It’s growing quicker than we can keep up,” Jennifer Winslett said of the farming business.

The Winsletts sell pastured chicken and eggs and grass-fed beef at local farmers markets, including Montevallo and Calera markets.

“The thing is, the meat is just so much healthier for you,” Winslett said.

To maintain pastured poultry, which includes chickens and turkeys, the Winsletts have to move the chicken-wire cages three times a day to allow the animals to have new grass.

“We process the chickens at the house, so I know who’s cleaning them and how clean they are,” Winslett said.

It takes eight weeks for a chicken to mature to processing weight and 20 weeks for turkeys. The Winsletts do not inject their birds with steroids, and complement their grass diet with scratch-grain supplements.

“With chickens, it’s every eight weeks, but we’re selling out so quickly. We sold 60 in three weeks, so I’m having to order every two to three weeks,” Winslett said.

The cows are sent to a slaughterhouse and the meat is inspected by a U.S. Department of Agriculture inspector. The meat is frozen and vacuum sealed, and then returned to the Winsletts for sale within two to three weeks.

“The key is it tastes good and it’s healthy,” Winslett said. “If you brown the meat to make it for spaghetti, you don’t even have to drain off any grease. There’s just enough to keep it from burning.”

The Winsletts have sold out of shares for their July harvest, but be sure to keep enough inventory for farmers markets.