CALERA – When Sandra Johnson began writing about 10 years ago, she never expected the stories to turn into anything. Now her stories are published in “Down Home Devotions,” a devotional that matches her childhood in Bibb County with lessons and characters from the Bible.

“Over a period of time, I began to think about having it published,” Johnson said. “Up until I met Tom Bailey, I didn’t think it would materialize into anything because all I met were dead ends.”

Tom Bailey, editor of Seacoast Publishing in Birmingham, said Johnson approached the publishing company to look at her compilation of stories. 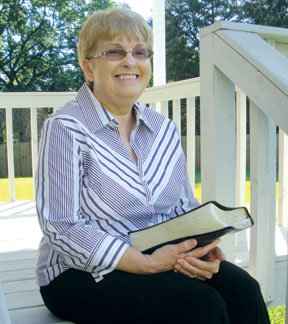 Calera resident Sandra Johnson took stories from her childhood and matched them with Bible lessons in "Down Home Devotions." (Contributed)

“As I got into it with Sandra’s book, I found it more interesting,” Bailey said. “She was just a natural writer, and I felt her stories would touch home with people who grew up in the kind of area where she was.”

Johnson and her husband, Phillip, moved to Calera about 23 years ago. Johnson travels around Shelby and Chilton counties with her husband as Phillip evangelizes. The Johnsons are members of Grace Chapel in Alabaster, but spend the majority of their time on the road, Johnson said.

“I thought she did a good job and she had these stories she was able to tell and bring her moral, Christian lessons to life of examples of growing up in Bibb County,” Bailey said. “I just thought she had a natural talent for telling stories and make the point come to life through the stories she told.”

Johnson said when she sits down to write the stories, she connects them with themes in the Bible.

“I’m hoping that in reading (the stories), some people will come to a knowledge of Jesus and others will grow in their faith,” Johnson said. “I think there’s a lot in there in helping young Christians.”

Johnson said she is considering a second book.

“This is my first, but I do have stories in my mind for a second book,” she said. “I’m always looking for things to write about.”

To purchase a copy of “Down Home Devotions” for $10, visit Sanctuary Bookstore in Alabaster’s Colonial Promenade, Scrubs 4 Less, located at 256 First Street Southwest, Alabaster or contact Johnson at 668-3431.

Hoover classrooms to get iPads, Nooks

By AMY JONES / Associate Editor HOOVER — After the success of a pilot program that put Nook e-readers in... read more