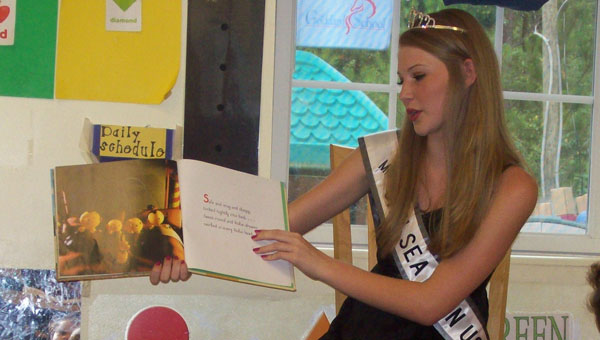 Raven Whitfield reads to children at the Goddard School in Hoover. (Contributed)

CHELSEA – Raven Whitfield describes herself as a tomboy, but after the 5-foot, 8-inch blonde competed in the Miss Chelsea Middle School pageant four years ago, she now shops for ball gowns and practices walking in heels.

“I was in a few (pageants) as a baby, but I quit because I was a tomboy,” Whitfield said.

“Once I did it, I realized how much I enjoyed it,” she said. “Who doesn’t like feeling pretty and dressing up?”

She won first alternate and then won princess in seventh grade. In eighth grade, she took home the title.

Brandy Whitfield, Raven’s mother, said she never competed in pageants, but is supporting her daughter.

“It stretches me,” Brandy Whitfield said of pageants. “When I’m having to help her, it gives me strength.”

Raven Whitfield said she would like to be an actress and model.

“But a more realistic dream is a marine biologist,” she said.

Brandy Whitfield said her daughter maintains a 4.1 grade point average and is involved with the Dunnavant Volunteer Fire Department.

Raven Whitfield has already given back to her community as a pageant queen by crowning the winners of a pageant at Shelby Ridge Health and Rehab and reading to children at the Goddard School, both of which are Whitfield’s sponsors.

“It’s overwhelming to see people want to support your child and help her achieve the things she wants to achieve,” Brandy Whitfield said.