From the hardwood to the pulpit 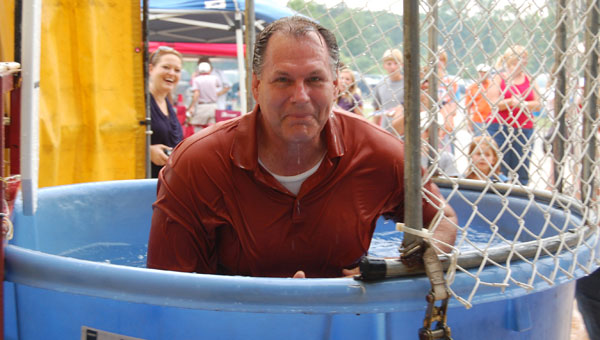 ALABASTER – A local pastor who spent the first half of his life chasing defenders down the basketball court now finds inspiration in helping others in the Alabaster area.

The Rev. Rick Swing of Westwood Baptist Church said that he grew up longing to just dress out for his high school varsity team while growing up in Indiana. Little did he know that he would do that and more on his path to finding his faith.

“My whole dream growing up was to put on a high school warm up varsity uniform,” he said. “I never really thought about professional basketball. I just grew up wanting to wear a high school uniform because in Indiana, basketball is huge.”

Swing, a native of Frankfort, Ind., grew up in a state where one sport is king, basketball. With the Indiana University Hoosiers, the Pacers and multiple high-school powerhouses, Swing said that he was out to make a name for himself in the sport.

And did he ever.

Swing’s sweet jump shot earned him a scholarship to The Citadel in Charleston, S.C. to play his beloved basketball at a collegiate level.

“My father taught me that if there is something you really want, you have to work hard for it,” he said. “For me growing up, there was an expectation of working hard.”

During his playing time at the Citadel, Swing was named team’s co-captain and was one of the Bulldogs’ top scorers averaging 13.2 PPG in his four years. He especially played an integral role in the 1979 season leading the Bulldogs to a 20-7 overall record, a first for the Citadel. Among the many accolades he received while at the Citadel, the pinnacle came in 2008 when he was inducted into the Bulldogs Hall of Fame.

“I knew that I could go there and play right away as a freshman,” he said. “I knew I could go down there and help the team win games because they had not been as successful up to that point.”

Hard work seemed to pay off for Swing. Following an impressive college career, Swing said he was just expecting to find a normal 9 to 5 job in Greenville, SC after putting basketball behind him. But after flipping on the TV set the day of the NBA Draft after taking a nap following his first day at work, Swing said he could not believe what he was seeing.

“I turned on the TV set and the sports segment of the news was on,” he said. “The tv came into focus and there was my picture. The sportscaster was saying that I was the surprise pick of the NBA Draft and I had no clue.”

After signing his rookie contract, Swing would only play a single season with Cavs before being placed on waivers. Swing said that he could have gone on to play with the Indiana Pacers after they showed interest in claiming him off of waivers. However, he chose to go on to play for a Christian traveling basketball team Athletes in Action.

“I’d like to say I went there because of the ministry part,” he said. “God was just telling me to move and so I did and started making my own support.”

Swing would spend three years playing with Athletes in Action and building a ministry through the program starting Spirit Express. But he said his true calling came while filling in for a student pastor at Ridgeway Baptist Church in Memphis, Tenn.

“My wife and I prayed about it and it helped out income wise,” he said. “At the end of the summer the head pastor told me I was the right guy to take over as the student pastor their and from that point on I said goodbye to the basketball part of my life and began working full time in ministry.”

For 27 years, Swing has continued his ministry and is currently an executive pastor at Westwood Baptist Church. His children Danielle, Joshua and Jordan have continued the family tradition of mixing athletics and ministry. Currently Joshua is on a basketball scholarship at Bethel University in Memphis, Tenn. and Jordan is entering his junior season playing guard for the UAB Blazers.