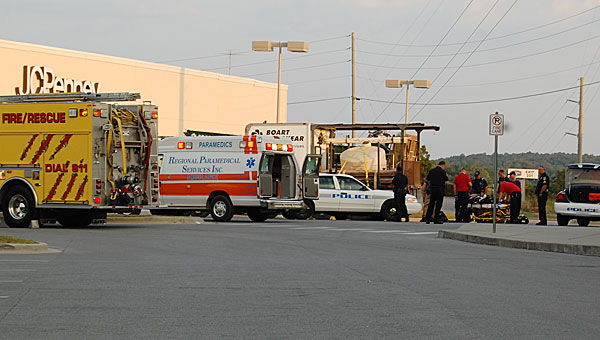 Paramedics, firefighters and police officers work to treat a shoplifting suspect after officers said the man "jumped onto" a police car June 25 in the south Colonial Promenade shopping center. The suspect suffered no serious injuries in the incident, police said. (Reporter Photo/Aldo Amato)

A shoplifting suspect suffered no serious injuries after police said he “jumped onto a police car” while fleeing officers in the parking lot of the south Colonial Promenade shopping center on June 25.

The incident happened at about 7 p.m. when Alabaster officers responded to a shoplifting report at the store. When police arrived, the suspect attempted to flee the scene and “jumped onto a” police cruiser, said Alabaster Deputy Police Chief Curtis Rigney.

“He ran from police and he was boxed in. He ran into a police car, basically is what happened,” Rigney said on June 26, noting the suspect’s name had not yet been released, pending a formal filing of charges.

Police said the suspect allegedly stole about $66 worth of merchandise from the store, which will result in a misdemeanor theft charge.

“It looked like a bigger deal than it was,” Rigney said.