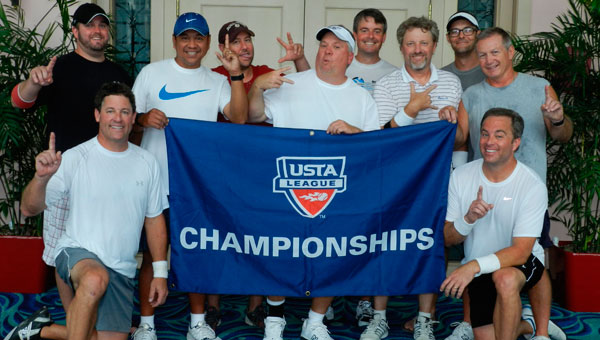 Bill Bussey, most notably known as ‘Bubba’ from the nationally popular “Rick & Bubba Show” has once been considered one of the two most sexy fat men alive, but now can just be called a champion.

Bussey has been a big supporter of the sport of tennis since he’s picked the game up later in life. His support a few years ago was a large part in bringing the Davis Cup to Birmingham in what turned out to be a huge success.

In April 2010 the Davis Cup semifinal match was held in Birmingham and drew in the largest Davis Cup crowd ever to a non-championship match.

Bussey is the respective captain of his own team in Pelham; a Pelham 3.5 adult tennis team, which just recently won the state championship in Mobile. To qualify to go to state a team must win their regular season league, unless that league has over ten teams which it can then send the top two teams to state.

This was the case for Bussey’s team which finished second in their league of more than ten teams with an impressive 11-1 record, but behind another Pelham team that finished 12-0. Bussey felt getting through their league and earning a spot in the state tournament was the challenge of the season.

“It’s a tough league in Birmingham; you start in the fall and end in January,” Bubba said, laughing. “You start when its 95 degrees, play through rain, and finish when it’s 32 degrees!”

In Mobile, Bussey’s team played teams from across the state such as Huntsville, Montgomery, and Muscle Shoals on their way to the championship. Bussey emphasized his earlier comments about the tough competition in Pelham.

“If you can win in Pelham, you can do well at state,” Bussey said.”

He agreed with the comparison to SEC football that the regular season prepared the team better for postseason. The statement turned out true since three of the final four teams in the state were out of Pelham.

“Pelham does a great job in supporting tennis especially with places such as the Pelham Racquet Club,” Bussey said.

On the experience of going and winning state, Bussey said, “It was a lot of fun, it gives us all a chance to play and compete again… and the ladies like it too!”

Bussey joked that he wasn’t sure how much longer some players would still be able to compete, but he feels it will can still be a few more years filled with fun.