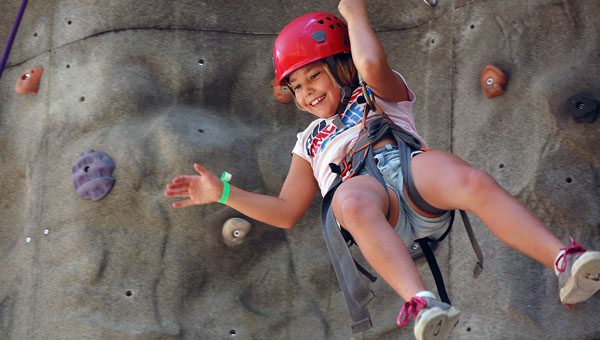 Eryn Watson, who is part of the 8- and 9-yearold group, climbs the rock wall with her fellow campers during Camp Ft. Clover at the 4-H Center in Columbiana. (Reporter photo/Jessica Crihfield)

COLUMBIANA – The kids at Camp Ft. Clover take canoe trips, climb rock walls and enjoy other traditional camp activities. They do, however, have one thing in common that makes camp even more memorable. All of the campers have a parent deployed in the military.

“Whenever service members are deployed, a lot of responsibilities fall to the kids because they’re at home,” said Rachel Simpson, coordinator for the camp. “It’s good for them to come here and be kids and be with other kids going through this.”

Forty-eight kids ages 8 to 18 participated in the weeklong camp at the 4-H Center in Columbiana from June 25-29. The campers must have a parent or guardian in the military, active duty, guard or reserve, but priority is given to campers with a parent or guardian who is deployed currently or about to be deployed.

Sisters Jessica Siebold, 17, who graduated from Spain Park High School and Hope Siebold, 11, a seventh grader at Berry Middle School, have been attending Camp Ft. Clover for the past three years.

“It’s helped a lot,” Jessica Siebold said. “At home, there are not a lot of (military) people who live near me.

“It’s just a great time to relax and have fun with people like you,” she added.

During last year’s camp, the girl’s father, who had been deployed for a year in Kuwait and Iraq, surprised his daughters by picking them up at camp.

“Everyone was crying with us,” Jessica Siebold said.

All of the campers are divided into six groups, and each of the groups has a video camera to record their week.

“We’ve been videoing what they’re doing, but today they’re addressing their loved one,” Simpson said, noting the videos will be sent to deployed parents.

About half of the campers’ deployed parents are in the National Guard, which means the kids don’t live on military bases surrounded by other military kids.

“I work with kids in the deployment cycle, and a lot of kids aren’t on an installation,” said Kelli Hill, the lead child and youth coordinator with the Alabama National Guard. “Here, there’s a sense of connectivity to other military kids.”