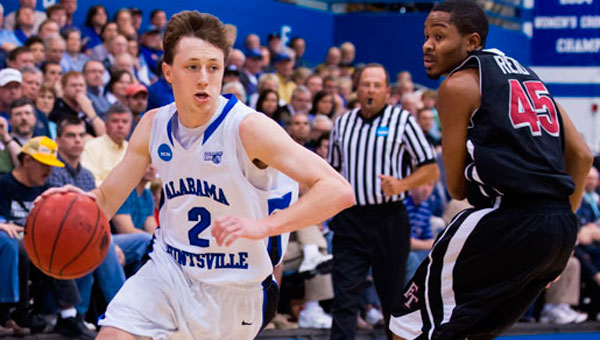 It wasn’t long ago that Josh Magette led Spain Park High School to the Alabama High School Athletic Association Class 6A Final Four at the Birmingham Jefferson Convention Complex as a junior in the spring of 2007.

Now, five years later, Magette is walking away from the University of Alabama in Huntsville with his name in the school’s record books and dreams of a professional playing career.

Magette was a star on the court for the Jaguars, earning Class 6A area tournament most valuable player honors in his junior and senior seasons, but still didn’t receive much attention from major college programs. He signed with the Chargers after they were the only team to offer him a scholarship.

Magette admits other teams may have been higher on his list, but he ultimately went where he was offered a scholarship. Spain Park prepared Magette for the next level with the fierce competition played against in high school.

“You have to play at a high level every night,” Magette said.

As a freshman, Magette played in every game and helped UAH turn around from a losing record the previous year to finishing six games above .500 his first season.

The following year, after being named the Gulf South Conference Freshman of the Year, Magette led UAH to an even better record his sophomore season with the squad finishing 23-7. That season, he was named to the All-Academic team and the second team All-GSC after leading the Chargers in rebounds, assists and steals.

During his junior and senior seasons, Magette led UAH to back-to-back 29 win-seasons, both years making appearances in the NCAA Division II Elite Eight.

Magette looks back and says the most enjoyable part of his outstanding career at UAH is “just playing with my teammates.”

“We were best friends and we had great relationships with our coaches,” Magette said.

In his four years at UAH, Magette played in all 125 of the Chargers’ games and finished with a total of 1,465 points scored. He led the Chargers on a 20-game winning streak his senior season, earning him a spot on numerous All-American teams, including the Basketball Times and the Daktronics All-America Teams.

“It’s kind of crazy,” Magette said. “If you’d have told me this would happen four years ago I wouldn’t have believed you. I never would have dreamed it.”

Now Magette is setting his sights on the next level once again, hoping for a chance to make a National Basketball Association roster. Magette said his dream started shortly after the season ended when he talked with his agent and listened to anyone who was interested.

Two teams responded and Magette went and worked out for the Memphis Grizzlies and the Utah Jazz. Magette could only describe the experience as “really cool.”

At the Memphis pre-draft workout, Magette competed against some of the best talent in the nation, including former Kentucky standout Marquis Teague, who was drafted by the Chicago Bulls in the first round of the NBA draft June 28.

Magette plans to attend the Grizzlies’ mini-camp in July after earning an invitation. Magette hopes the mini camp pays off with a spot on Memphis Grizzlies’ summer league team.