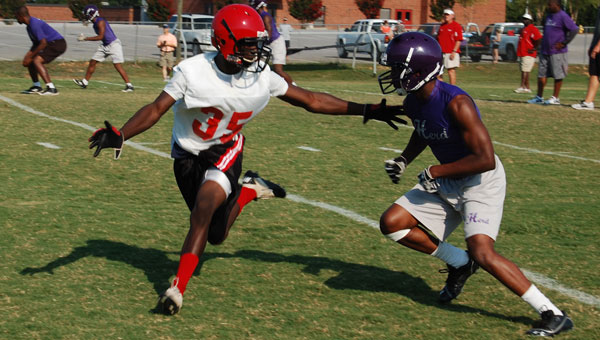 ALABASTER – The Thompson Warriors varsity football team have continued to build their program this summer through 7-on-7 matchups with Birmingham-metro schools.

In an effort to keep his players focused and in shape, Thompson head coach Michael Montgomery said that these glorified practices are similar to the OTA’s in the NFL.

“What we talk about is running a professional program,” the first year coach said. “In this case we’d like it to be at NFL or colligate-style level.”

Montgomery said that the four 7-on-7 scrimmages are an opportunity for him to sell the program to the players.

“One of the things that this does is that we go to neighboring cities and sell the dream to the kids,” he said. “Only God knows if these kids will be playing on Saturdays and Sundays but it is an opportunity for them to see what it is like at the next level.”

The tournament style play does not only benefit the players through off-season conditioning, Montgomery said that it also benefit’s the coaches.

“This gives us an opportunity to do some situational drills and see where we are,” he said. “What we talk about at Thompson right now is building a blueprint.”

In accordance with AHSAA guidelines, each high school football team in the state is allocated seven days to conduct 7-on-7 scrimmages during the summer months. In those seven days, teams can schedule as many matchups as they please.

Montgomery said the heat sometimes plays a factor in conditioning, but that the coaching an training staff at Thompson are always looking out for the player’s safety.

“We have full time trainers here and we don’t stay out on the field too long,” he said. “There job is to go out and there compete and trust us knowing that we will take care of them.”

Montgomery also said that throughout the four 7-on-7 matchups, he has been more impressed by the team overall rather than anyone individually.

“The thing I have been impressed with the most is the team,” he said. “Everyone works hard and we hold ourselves responsible for being our brother’s keeper.”

By ALDO AMATO / Staff Reporter ALABASTER – With the London Olympics just around the corner, young and up-and-coming wrestlers... read more