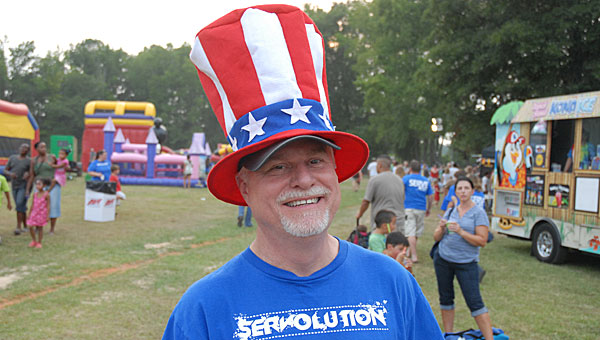 More than 7,500 people braved the heat at Veterans Park on June 30 as Kingwood Church and the city of Alabaster hosted the third-annual Celebrate America festival.

The event featured live music from a pair of local bands, food from several area vendors, a Kid Zone including inflatable games and rides and Looney Toon cartoons displayed on the city’s large inflatable screen.

Celebrate America culminated with a massive fireworks display by Pyro Productions, which also produces Birmingham’s “Thunder on the Mountain” display at Vulcan Park.

“That’s probably some of the best fireworks you’ll see, because you are so close to them,” said Kingwood Christian School Administrator Benny Cunningham, who worked with other KCS, Kingwood Church and city volunteers to organize the festival. “I think it was a great success.”

For the past few years, donations from Kingwood Church members and the city of Alabaster have funded the free event, which routinely draws several thousand people.

The event began at 6 p.m., but the majority of the crowd arrived as the setting sun brought cooler temperatures, Cunningham said.

“There were probably about 1,500 people there when the first band started playing, so I think a lot of people came later,” Cunningham said, noting high temperatures were in the triple digits on June 30.

Shortly before sunset, Cunningham said a team of police-trained Kingwood Church parking volunteers were working to guide visitors to “every available parking spot” in Veterans Park.

The heat and dry conditions also prompted event organizers to closely coordinate with the Alabaster Fire Department, which had an engine, a brush truck, a first aid tent and several emergency medical technicians on-site.

Kingwood Church volunteers also worked to clean the park immediately after the event and early the next day, Cunningham said.

Kingwood Church and Alabaster officials are planning to continue hosting the event in the future, Cunningham said.

“As far as we know, this is something we are going to keep doing every year,” Cunningham said.

Be careful in the summer heat

By NEAL WAGNER / City Editor It seems like it eventually happens every year in Alabama, but I think the... read more