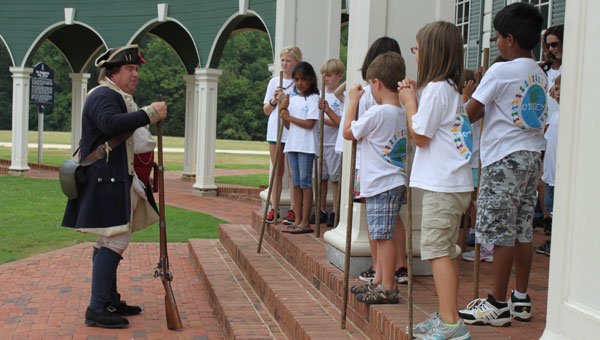 Lt. Col. Thomas Knowlton, a soldier in the U.S. Army portrayed by Chris Long, instructs young visitors how to load a musket during Camp 1776 at the American Village July 2. (Reporter photo/Christine Boatwright)

MONTEVALLO – A group of 5- to 10-year-olds shouted “fire!” as they shot pretend muskets at imaginary British soldiers at the American Village July 2.

The group of children from Odyssey Early School at Trace Crossings in Hoover were attending Camp 1776, a two-hour camp for all ages at the American Village.

Before the camp began, Reservations Manager Jessica Averett passed out a multiple-choice quiz asking the kids to define patriotism, courage and sacrifice. The final question asked kids if they understood what good citizenship meant. 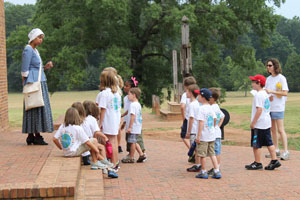 Alice Faye asked the kids if they considered themselves good citizens, as their help was needed to fight the British at Camp 1776 July 2. (Reporter photo/Christine Boatwright)

“Do you want some king telling you what you can do?” Knowlton, a historical interpreter, asked the kids.

“No!” the kids responded before taking the soldier’s oath.

The kids then learned how to be American spies and witnessed the arrest of Capt. Nathan Hale.

“Why did they take him away?” asked Andon, one of the students with Odyssey, as Hale was taken to prison. “We’ve got to go rescue him.”

The rest of the camp took the children through British headquarters and to President Washington’s house.

“We have done Camp 1776 previously in a different form, but this is the largest and richest experience we’ve offered to visitors,” Poole said.

Poole said the only cost for the camp is regular admission, which is $8.50 for adults and children older than 4, $8 for seniors and children under 4 are free.

The camp runs Monday through Friday at 10 a.m., noon and 2 p.m. through Aug. 10, according to Reservations Manager Jessica Averett.