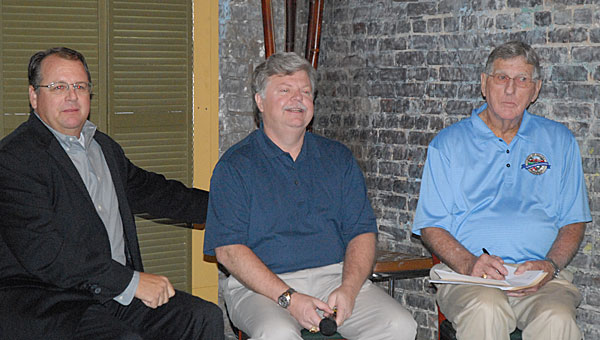 Three Helena mayoral candidates shared their thoughts on the city during a July 3 forum sponsored by the Helena Business Association at the La Reunion café.

Hall, who served as the Helena police chief from 2000-2004, said he would like to see Helena develop a comprehensive plan to sustain the city’s business climate.

“First and foremost, I hope you (business owners) sustain, grow and prosper, and I hope you will be a part of our community for a long time,” Hall said.

Penhale gave an update on several city projects, and said there is a “bright spot ahead.”

“I’m proud of everything that’s been done in our city, but I don’t say that I’ve done it,” Penhale said.

Penhale said he is working to secure grants to add new soccer and football fields to the Helena Sports Complex, and said a Zaxby’s restaurant is planning to open in the former Shelby Cleaners location off Shelby County 17. He said there “will be another grocery store coming in soon” to the former Winn Dixie.

Eddins, the owner of Helena Landscape Supply, said city officials must take steps to keep Helena residents in the city when they are shopping. He said when Helena residents go outside the city to shop, Helena loses out on much-needed sales tax dollars.

He said he would like to see Helena model itself after Blue Ridge, Ga., which he said has a similar size and feel to Helena.

“You can’t find a parking spot (in Blue Ridge) on the weekends, because it’s buzzing with activity,” Eddins said. “That’s not going to happen here unless something changes.

“I want to take my business experience to City Hall,” Eddins said.

By NEAL WAGNER / City Editor The Pelham City Council will re-bid a project aimed at cutting down on the number... read more