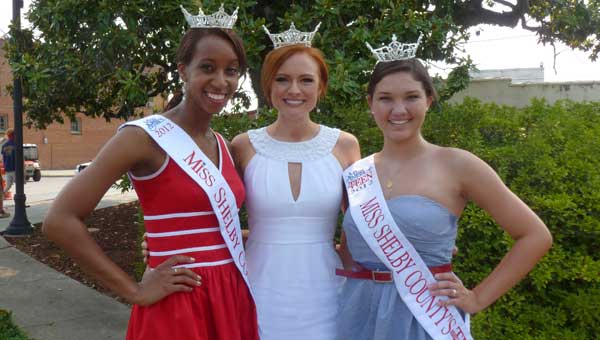 In honor of the anniversary, all past titleholders have been invited to watch a new group of young women compete for the crown.

Miss Shelby County 2011 Sydnii Todd and Miss Outstanding Teen 2011 Mary Ann McDougal will be on hand to crown their successors. Anna Laura Bryan, the newly crowned Miss Alabama 2012, will emcee the pageant, which is sponsored by the Vignette Club. Club members are responsible for selling advertisements for the program, as well as tickets. They also volunteer for other duties, including set design, program design and hosting luncheons and dinners in conjunction with the pageant.

Carol Hill, who was the first co-director of the pageant, is in charge of contacting previous titleholders about the event. The titleholders will attend a reception prior to the pageant.

“We’ve had a great response,” she said.

Diedre Downs Gunn, who was Miss Shelby County 2000 and was named Miss America in 2005, is expected to attend.

Hill said the Miss Shelby County pageant was started in conjunction with the Liberty Day celebration.

“I was asked years ago when they were starting Liberty Day,” Hill said. “(Rebecca Turner) helped me get it started. We were the first co-directors in 1987.”

Over the years, the Miss Shelby County pageant has turned out several winners who went on to win the Miss Alabama pageant. In addition to Gunn, Miss Alabama winners include Amie Beth Dickinson Shaver and Liz Cochran.

The Miss Shelby County Pageant will be held July 20 at 7 p.m. at Shelby County High School in Columbiana. Tickets cost $12 and can be bought at the door.

Montevallo native fishing for a living