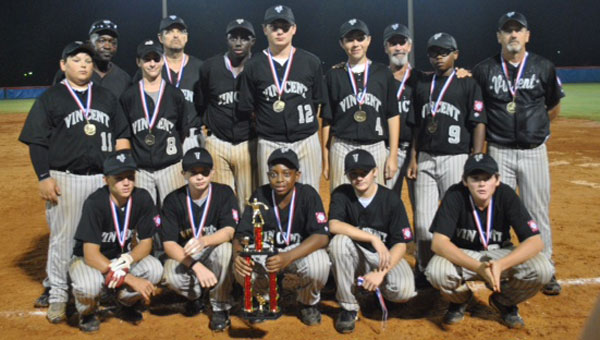 The Vincent 14-and-under All-Stars are headed to South Haven, Miss. to take part in the Dizzy Dean World Series after a great season in area, district and state tournaments this summer.

The 14-and-under All-Stars are the first team from Vincent to make the trip to the Dizzy Dean World Series.

Vincent lost the first game of the tournament and fought back from the losers’ bracket, where they had to play in two doubleheaders. Vincent won six straight games, including wins over Asheville, Clanton, and Jemison to reach the championship game.

“I told the boys they had nothing to hang their head about,” Garner said. “We came up just one game short, and the kids never gave up.”

Throughout the season Garner gave the team a valuable lesson for baseball and for life, telling his players that if they worked hard they would be successful. Garner has been coaching for 28 years and is very excited to be taking the first team ever from Vincent to the World Series.

Garner knows that his team wouldn’t be having a great season without the support of the team’s parents.

“The parents contribute so much and really make this possible,” Garner said.

By ALDO AMATO / Staff Writer ALABASTER– Faced with what seemed like a permanent injury at an early age, a... read more