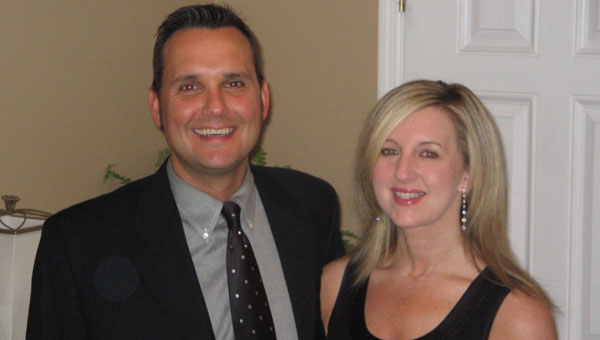 Mike and Amy Holmes, have traveled to most states and Canada as part of the world-renowned Joyce Myers Ministry. (contributed)

Mike was in his senior year of high school when his family moved from Mississippi to Shelby County.

“It was hard to leave the kids I had known most of my life,” he said. “But I probably wouldn’t have met Amy if I hadn’t.”

After graduating from Thompson High in 1988, Mike began working at K-Mart in Pelham where Amy Ingram of Chelsea was also working a summer job. They were married in 1991 while Amy attended school at Auburn and Mike served in the Air Force.

In 1992, he processed out of the Air Force, and the couple moved to Chelsea.

“We then put ourselves through school at the University of Montevallo,” he said.

But he left EWTN for eight years while he and Amy traveled with the world-renowned Joyce Myers Ministry (JMM). Mike worked as a cameraman, director of “Life in the Word” programs, and manager of the broadcast department. He helps at conferences, meeting and ministering to people. Amy was travel team secretary, worked resource tables and on the prayer line.

“I quickly realized that a few of my words offered in prayer were not sufficient for the extreme needs of some of our callers,” she said.

“The Holy Spirit began teaching me how to pray the scriptures over the needs I encountered each day. In the beginning I felt powerless, but the Spirit began calling the Word to my remembrance, and I knew I was praying with power.

“God showed me that it is He and not I who will do the work. That is one of the greatest things He taught me during my time at JMM.

“I know God used my years at the ministry to prepare me to minister His love to my students,” she said.