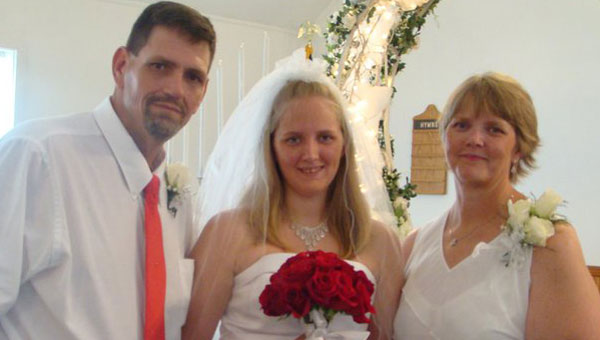 Happy memories of the Brechin family, the wedding of daughter Lindsay to James Richardson. From left, Kent, Lindsey and the late Leslie Brechin. (contributed)

On a chilly morning in January 2012, Kyle and Don Gothard were sitting in church and heard the wail of ambulance sirens. Little did they realize the sound would forever change their lives.

Leslie Gothard Brechin was driving her husband Kent that same morning when a blinding, excruciating headache made her pull over their car. Emergency crews were called; the ambulance and first responders came. Brechin had suffered a fatal, massive brain aneurysm.

By the time the Gothards saw their daughter’s body in the hospital, her spirit had gone to be in Jesus. An organ donor, Leslie’s body lives on in the eyes and organs in others.

“God lent me this child for 50 years,” said her mother, Kyle. “He knew her time of earth.”

Brechin’s roots go back five generations in Shelby County. She grew up in Columbiana and graduated in 1980 from Shelby County High School.

She loved Jeff Gordon and NASCAR. A devoted Wildcat, Brechin was president of the SCHS Alumni and was very involved in planning class reunions. Leslie was caring, happy and faithful and a true people person who never met anyone she did not like.

“Leslie had a heart of gold,” said friend and classmate Lydia House Austin. “She supported everyone else. She just had the biggest heart.”

Please join Leslie’s Angels for a night of fellowship, food, music and fun in memory of Leslie Gothard Brechin.