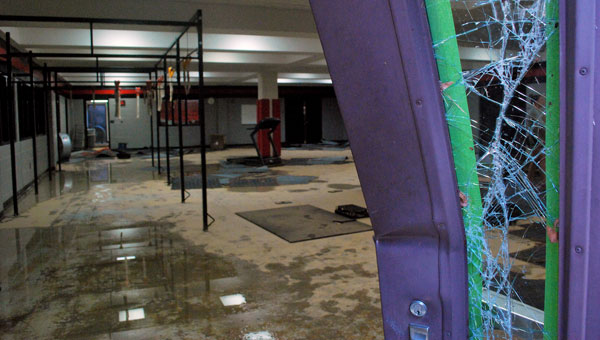 More than 10 feet of water bent and forced open a metal door leading into the Thompson High School weight and locker room after heavy rains hit the area on July 9. After the door was forced open, 6 inches of water flooded the facility. (Reporter Photo/Jessica Crihfield)

About 6 inches of standing water filled Thompson High School’s weight and locker rooms the night of July 9 after flooding forced open a metal door and rushed into the facility.

At about 7:30 p.m. on July 9, surveillance cameras inside the training room captured water bursting open a metal door at the bottom of a stairwell and quickly flooding the facility, which is located in a basement on the northwestern corner of the school.

According to school officials, heavy rains had caused a storm drain in the school’s back parking lot to “become overwhelmed.” The water then began to pool near the storm drain, and eventually started flowing down the outdoor concrete stairs leading to the training room.

After water levels reached more than 10 feet in the stairwell, the water pressure forced the metal door open. The water bent the metal door, pushed a treadmill machine across the training room and damaged equipment throughout the facility, including teachers’ computers and equipment waiting to be sold by the THS athletic department.

THS girls’ basketball coach Cara Crosslin said school officials and THS athletes had been working recently to put the finishing touches on an extensive renovation of the facility. The facility primarily is used by the THS softball, volleyball and wrestling teams.

“We started on (the renovation) on the last day of school. A lot of the girls were helping, and they had a lot of pride in it,” Crosslin said. “Some of the athletes hadn’t even seen it yet. It’s frustrating. You try to do something for the kids and this happens.

Crosslin said “there is no telling” how much it will cost to repair the damage. Shelby County Assistant Superintendent Tom Ferguson said the facility is covered under the school system’s insurance, and said school officials had already submitted a claim to cover the repairs.

THS wrestling coach Shawn Weltzin said flooding has been a problem in the stairwell in the past, and said he had previously asked county school officials to improve drainage in the area.

“Everything was looking great, and was ready for the school year, but not anymore,” Weltzin said.

Ferguson said the county school system will hire a company to clean the facility before repairs are made, and said county school officials will discuss taking steps to prevent flooding.

“We definitely want to see what we can do to keep that from happening again,” Ferguson said.

FROM STAFF REPORTS HOOVER — The Alabama Department of Revenue is offering a New Business Workshop to answer any tax... read more