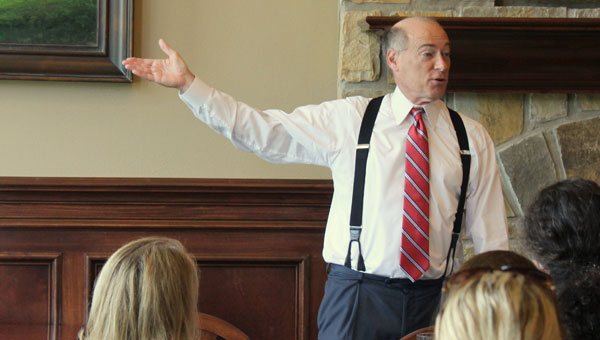 CALERA – Chief Meteorologist James Spann has less than three minutes to share nightly weather forecasts for ABC 33/40, but spent more than an hour sharing his experiences of April 27, 2011 with Calera Chamber members July 10.

“Most of you think I have the easiest job in the world,” Spann said. “People think I only work like 10 minutes a day.”

During the chamber meeting at Timberline Golf Club, Spann said he wakes up at 4:52 a.m. every morning to relay weather predictions for 27 radio stations across the country. After spending time with his wife of 31 years, Spann speaks somewhere every day. He works in the office from 2-11 p.m., appearing on television at 4 p.m., 5 p.m., 6 p.m. and 10 p.m. He said he finally gets to bed about 1 a.m. each night.

“Everyone wanted me to talk about April 27th, but I didn’t want to,” he said. “About the tornado, I think we do need to address it. Two hundred and fifty two people died that day. It’s inexcusable.

“A lot of these people I knew, and it became very personal to me,” he added.

Spann said a major problem with tornadoes and weather catastrophes is the false alarm ratio.

“Eighty-two percent of tornado warnings are false alarms,” he said. “It’s cry-wolf syndrome. I don’t blame the Weather Service. They’re mandated by the government to issue a warning for every tornado.”

Spann said weather radios are one of the best ways to be aware of weather issues, not relying on tornado sirens.

One of the attendees asked Spann about wearing helmets during tornadoes.

“Most who die in tornadoes die aloft,” Spann said, encouraging parents to have children wear helmets during tornadoes.

After April 27, Spann visited Tuscaloosa, where he spent some of his childhood. He said he met Tuscaloosa Mayor Walt Maddox.

“Walt and I had a good cry together. I think we both felt like we did something wrong. Those people died on his watch, and they died on my watch,” Spann said.

“Those tears started a healing process that continues today,” he added.