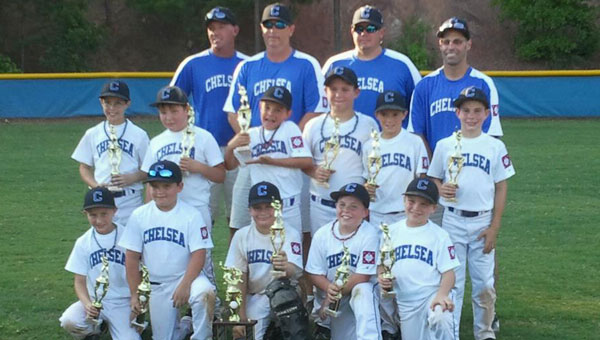 The Chelsea 9-and-under Dizzy Dean All-Star team was recently crowned regional champions and earned a trip to the state tournament, where the team finished fifth out of 18 teams.

Chelsea finished the season with a 10-6 record under head coach Scott Szush.

The team took the playing field in its first tournament this summer in the Leeds Invitational. Of the 10 teams in the tournament, Chelsea was the only 9-year-old team but still came in fifth place.

Next up was the Chelsea Invitational. Szush’s team improved from their fifth-place finish in their previous tournament and took second place.

Chelsea continued to improve as they moved onto their next tournament winning the regional championship.

“It was an honor to be selected to coach the Chelsea 9U All-Star Team . We had an excellent group of players that pulled together as a team and consistently performed with a high level of confidence, focus and intensity.  It makes my job easy as head coach when you have players with the talent level that we had and excellent assistant coaches.” Szush said.

The team earned a trip to play in the state tournament and although it didn’t win, it still had a great showing. Chelsea finished fifth out of 18 teams in the tournament. Szush said he was very impressed by his team’s offense that batted above .500 for the entire all-star season.