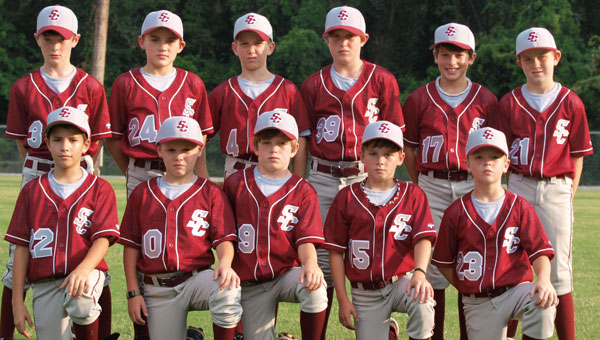 The Shelby County 10-and-under Dizzy Dean All-Stars are on their way to South Haven, Miss. to play in the World Series after winning the state title.

Shelby County has been nearly unstoppable this summer, as its 23-1 record shows. Head coach Greg Warren had his team ready from the first tournament when Shelby County won the Jemison Invitational.

The Shelby County team, which includes youth from Columbiana and Wilsonville, remained undefeated in its following tournament as it claimed first place in the Gardendale Invitation. Shelby County stayed on an incredible roll and swept both the district and area tournaments.

Still undefeated, Shelby County took part in the state tournament. The team reached all the way to the winners’ bracket finals in the double-elimination tournament before finally being defeated by Jackson County.

Shelby County dropped to the losers’ bracket, but fought back to the reach the championship series against Jackson County again. The team wouldn’t be beaten in the second meeting, downing Jackson twice to take the state championship.

Warren said the team just fights hard and works to be the best, especially in practice.

“Our hitting and pitching carried us,” Warren said. “We were deeper in pitching than most people thought. You have to be to get through so many games.”

Warren said his team always came up with the run support the pitching staff needed.

“Hitting was key too,” Warren said. “Every player came through at some time or another with a big hit.”

Shelby County hopes to remain hot and stay on its winning track as it heads to the World Series, which begins July 20 in South Haven, Miss.