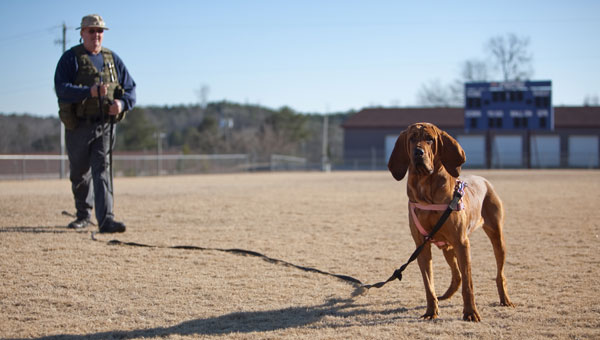 COLUMBIANA – A local nonprofit needs the community’s help to win a Toyota Highlander from Toyota’s 100 Cars for Good giveaway July 23.

Based in Columbiana, K9 Specialty Services of Alabama trains narcotics and search-and-rescue dogs to donate to police departments that cannot afford them. Les Brown and Chad Lovelady, a Montevallo policeman, founded the nonprofit eight years ago, and it has now donated nine dogs to police departments across Alabama.

Brown and his team also train search-and-rescue dogs, which they used after the April 27, 2011 tornadoes.

“We’re not a department of trained firefighters that go rescue people in buildings,” Brown said. “We’re volunteers that have trained dogs and people who rescue people.”

According to Brown, K9 Specialty Services of Alabama needs a Toyota Highlander.

“I was in Hackleburg last year on April 27, and I have to be able to sustain myself and my dog for three days with food, water, necessities, climbing gear, MREs and dog food,” Brown said. “As you can imagine, (Hackleburg) was decimated, and there was nothing there for several weeks.”

Brown said his nonprofit needs a vehicle to carry equipment, but also first-aid equipment for victims.

“In an emergency, you’re on your own and need to be take care of yourself and your dog and any victims you come across,” Brown said. “We were able to recover three victims from that (April 27) storm, which gave their families closure.”

Brown and his team currently use personal vehicles and resources for emergency situations.

To participate, visit Facebook.com and search “Toyota 100 Cars for Good” on July 23 to vote for K9 Specialty Services of Alabama. For more information, email Les Brown at Brown354370@bellsouth.net.

By NEAL WAGNER / City Editor The Alabaster City Council during an upcoming work session could begin discussing a plan to... read more