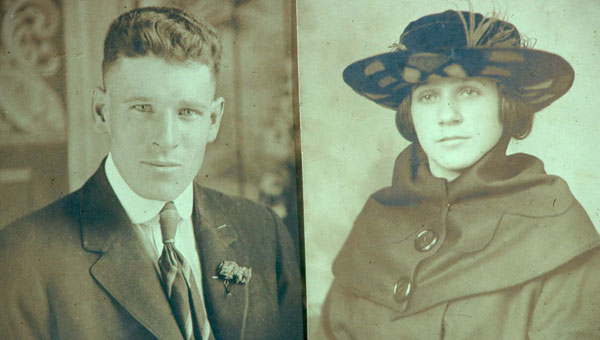 Willis Moore, a Shelby County farmer, brought Kentucky school teacher Lillian Tuttle to Chelsea as his bride in 1921. Their daughter Earlene Moore Isbell is assembling a book about the family. (contributed)

“The Tuttle home is still standing on the hill overlooking the Kentucky River. The river makes a big horseshoe bend just before reaching the home place. One of the most unforgettable recollections of the Tuttle children was that of hearing a steamboat’s whistle. When this happened, they all started yelling, ‘Steamboat around the bend.’ Rushing to the upstairs windows, they watched and waved as the steamboat made its way around the bend and on down the river. Just imagine Lillian’s surprise and elation when years lateR a motion picture named “Steamboat Around The Bend” came to the theater in Columbiana, Alabama! The admonitions and frowns of fellow church members did not deter her from taking us children to see this legacy from her childhood.”

This is one of the stories Earlene Moore Isbell shares in a manuscript, which she hopes to soon turn into a book.

Willis brought his bride to live in the home of his mother at Calvary (now part of Chelsea), which was a surprise to Lillian. She once told me she had expected to have a house of her own.

Lillian and Willis did acquire a house in 1925, when they bought land and the old Coalville post office near the new town of Chelsea.

The late Lillian Moore was a long-time teacher in the Shelby County school system.

Isbell is in the process of assembling her material and deciding on a printer. She welcomes advice on both. Interested persons may call her at 678-6435.

Mike and Amy Holmes, have traveled to most states and Canada as part of the world-renowned Joyce Myers Ministry. (contributed)... read more