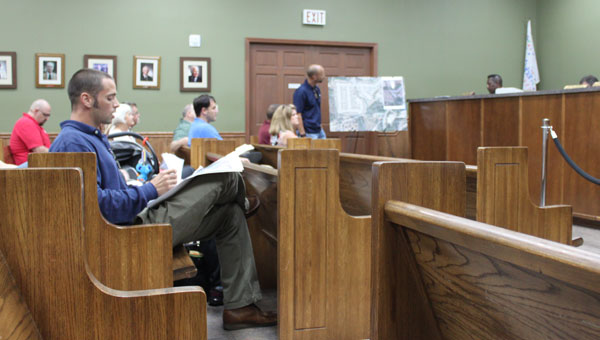 Calera resident Robert Nicholas, left, presents his case about the easement in Meriwether subdivision to the mayor and city council. (Reporter photo/Christine Boatwright)

CALERA – Residents of Meriwether Subdivision in Calera filled the Calera City Council July 16 work session in response to a letter sent by the city.

According to resident Robert Nicholas, residents of 21 subdivision properties received a certified letter telling the residents they had 15 days to remove vegetation from the bank of a ditch, or easement, behind their homes.

The issue heightened when Nicholas said Southern Haulers, who built adjacent to the subdivision, has created a floodplain, which is improperly “dumping into the ditch” behind one of the residents’ homes.

“It’s a city easement that is being put off on citizens of Meriwether,” Nicholas said. “There is no homeowners association.”

City Engineer Chris Pappas said the city maintains an easement if a problem jeopardizes the integrity of the utility, but the easement has not been maintained recently.

“We never had a flooding issue until Southern Haulers came in,” Nicholas said. “Their retention pond is inadequate at best.”

Pappas said the city maintains utilities and drainage within a public right of way.

According to Pappas, Southern Haulers’ retention pond was designed and approved by inside engineers with the company.

According to residents, the water flows from Southern Haulers’ retention pond and into a ditch where it is designed to take a sharp right-hand turn and flow into a stream.

“You’ve got hundreds of easements all over the city. If you make a policy to maintain the easement, you put a huge requirement on the pubic works staff,” Pappas said.

During the council meeting, Mayor Jon Graham said the letter has been rescinded, and the city will work with residents to solve the problem.

Pappas agreed to call the inside engineering company that designed the retention pond and return to the Aug. 6 council meeting with a recommendation to the council.

-Unanimously approved the purchase of a $1,600 ice maker for fire station No. 1.

-Approved the resolution to appoint election officers to work the municipal election Aug. 28.