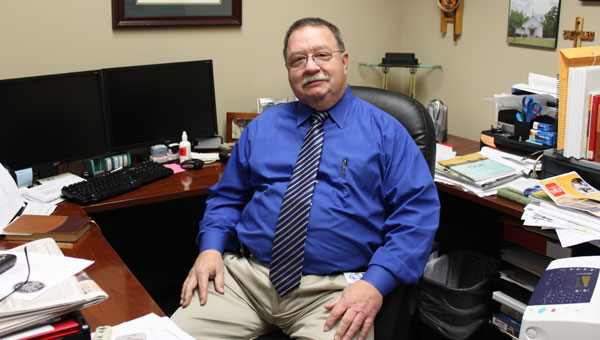 WESTOVER – Dennis Agnew may be one of the busiest men in the county, but that didn’t stop him from following God’s calling to pastor Mount Tabor United Methodist Church in Westover.

Agnew serves the city of Hoover as the administrative assistant for the Hoover Fire Department. He also supervises first aid at Birmingham Barons’ games and instructs American Heart Association classes.

Agnew started his ministry in 1999 when he was involved with Alabaster First United Methodist Church.

“I think that’s what developed me into being a pastor,” he said.

Agnew began his pastoral ministry in 2007, and plans to finish his pastoral training this year. His first assignment as a Methodist pastor was with Mt. Era, a church located between Alabaster and Columbiana. Agnew was transferred to Mount Tabor in Westover on Father’s Day 2012.

Agnew began serving as a “volunteer servant” at Lakeview Pelham’s First United Methodist Church around Easter 2012. He continues to work in the ministry of the Pelham church Sunday mornings before driving to pastor at Mount Tabor.

“My main goal is to get kids in the church,” Agnew said, noting he is working on improving technology in his new church. “That’s what brings young people into the church. Not the same old, same old.”

One way Agnew hopes to bring new families into the church is through Community Parents’ Night Out on Aug. 3. Children 10 years and younger are invited from 6-9 p.m. to the church for food and a kid-friendly movie while parents enjoy a night off.

Agnew, a cancer survivor, said God has been good to him.

“I figure God had a reason for getting me through all this,” he said. “It’s been whatever he’s asked me to do. If it’s possible, I’ve done it.”

By NEAL WAGNER / City Editor Beth McMillan has qualified to run for Place 3 on the Pelham City Council during... read more