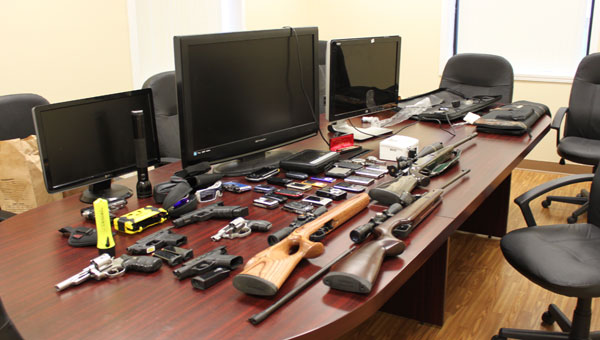 CALERA – Calera Police arrested a Calera man July 16 after receiving a disturbance call. The arrest, along with a search warrant, led investigators to discover a number of stolen goods in the man’s home, including firearms, iPods, televisions, phones and more.

According to the report, Calera resident Desirre Martes Griffin was in possession of items that fit the description of items taken during recent car break-ins in both Calera and Alabaster.

Calera Police Chief Sean Lemley said the arrest “cleared up a lot of breaking and entering” incidents in the area.

“A lot of the merchandise is unaccounted for, as it was not reported stolen,” Lemley said.

Lemley is encouraging Calera and Alabaster residents to check their vehicles for their firearms and electronics to be certain their property wasn’t stolen recently.

The report stated four victims’ items have been identified, and warrants were obtained for the four cases. The investigation is on-going.

According to Lemley, the thefts have occurred when perpetrators have tested vehicle handles to check the locks. If the vehicle was unlocked, the thieves stole valuable property.

“It’s a plague,” Lemley said. “People leave their cars unlocked with all kinds of valuables sitting in their driveway.”

The Calera Police are urging citizens of Calera and Alabaster who may have had property stolen, such as firearms, iPods or televisions, to contact the Calera Police at 668-3505 and file a police report.

A member of the Pelham Fire Department's Explorer program teaches Webelos Scouts how to perform the Heimlich maneuver at Oak... read more