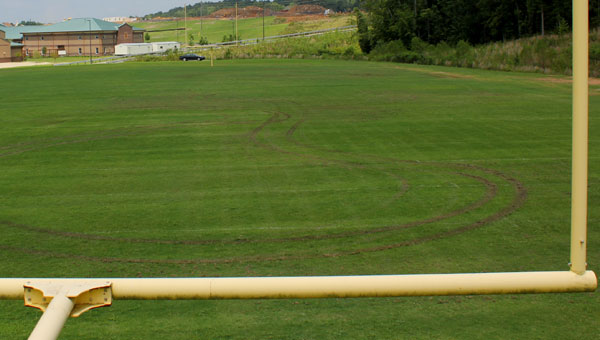 Helena Middle School football parents will likely have to reach deep into their pockets and pull out some extra cash to help pay for damage to the Panthers’ practice football field after vandals made their presence felt following a day full of heavy rain July 18.

HMS Principal Scott Knight said a motorized vehicle of some type entered the field and left muddy tracks, including donuts, across the practice field. Knight, who said it’s the fourth time the field has been vandalized in less than one year, said estimated costs to fill the tracks with sand surpass $1,000.

Knight said the community has had to pay for field repair following the vandalism incidents because the Shelby County Board of Education doesn’t allocate any funds to athletic field maintenance.

“All of the bills came from the hard work of our parents and community,” Knight said.

Knight said the three previous vandalism incidents occurred last fall, but the most recent damage was the most extensive.

“They were not near as bad as what we saw last night,” Knight said of the previous incidents.

The Panthers’ football team recently began using the field for two-a-day practices in advance of the 2012 season, Knight said. Knight also noted the field is the only open space surrounding the school and is also used by the school’s physical education classes.

“A lot of parents are upset about it,” Knight said.

Anyone with information about the incident is encouraged to contact the Helena Police Department at 663-6499.

FROM STAFF REPORTS The University of Montevallo women’s golf team has released the fall portion of its 2012-2013 schedule. The... read more